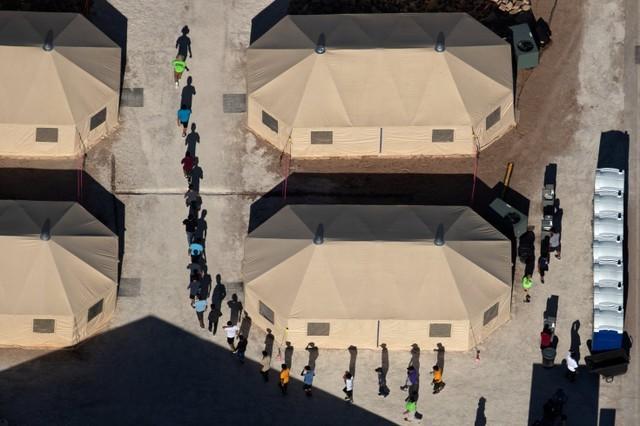 (Reuters) – The U.S. government, under court order to quickly reunify parents and children who were separated after crossing illegally into the United States from Mexico, has expanded its use of DNA tests to establish paternity in immigration matters.

FILE PHOTO: Immigrant children are led by staff in single file between tents at a detention facility next to the Mexican border in Tornillo, Texas, U.S., June 18, 2018. Picture taken June 18, 2018. REUTERS/Mike Blake

The government says DNA testing is a faster means of confirming parentage than relying on assembling documents such as birth certificates.

Under President Barack Obama, DNA testing of unauthorized border-crossers was rare, former administration officials said, but one said it was sometimes used as a last resort to verify family connections when placing unaccompanied minors with sponsors in the United States.

It was also used, and still is, to verify family ties of many refugees seeking permission for family members to join them in the United States.

Such testing looks at a small portion of DNA, known as “short tandem repeats,” to identify inherited regions of DNA that can vary from person to person.

In a declaration filed with the U.S. District Court in San Diego on Thursday, U.S. Health and Human Services official Jonathan White described the testing as a “faster but costlier method for confirming parentage than collecting and assessing documentation and anecdotal information.”

The filing was made in a class-action lawsuit brought by the American Civil Liberties Union against Immigration and Customs Enforcement on behalf of parents who were separated from their children by immigration officials. The judge in that case has ordered that children under age 5 be reunited with their parents by Tuesday, and that all minors separated from their parents be reunited by July 26.

White said field teams are taking swabs from the cheeks of children and adults and sending them to a third-party laboratory for analysis. The process takes about a week, he said in the declaration, though it can take longer to complete verification.

LabCorp, one of the largest providers of DNA testing to prove parentage, said it is not involved in the current testing of immigrant parents and children. DNA Diagnostics, another company certified for DNA testing, declined to comment on any testing authorized by the federal government.

Dave Silver, marketing director at DNA Diagnostics, said the company’s tests to identify relatives can cost in the “hundreds of dollars,” due in part to expenses associated with assuring “chain of custody” for the DNA.

After the company conducts a DNA test at its laboratory, a written report is generally issued to whoever purchased the test and the collected DNA is destroyed after six months, he said

“DNA testing is the method of parental verification most likely to protect children from harm given the compressed time frame imposed by the court’s order,” White said in his declaration.

Neither HHS nor the Department of Homeland Security responded to requests for information on the testing.