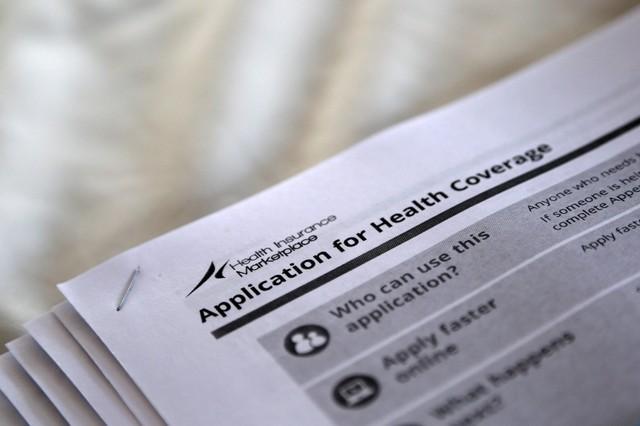 WASHINGTON/NEW YORK (Reuters) – Health insurers warned that a move by the Trump administration on Saturday to temporarily suspend a program that was set to pay out $10.4 billion to insurers for covering high-risk individuals last year could drive up premium costs and create marketplace uncertainty.

FILE PHOTO: The federal government forms for applying for health coverage are seen at a rally held by supporters of the Affordable Care Act, widely referred to as “Obamacare”, outside the Jackson-Hinds Comprehensive Health Center in Jackson, Mississippi, U.S. on October 4, 2013. REUTERS/Jonathan Bachman/File Photo

The Affordable Care Act’s (ACA) “risk adjustment” program is intended to incentivize health insurers to cover individuals with pre-existing and chronic conditions by collecting money from insurers with relatively healthy enrollees to offset the costs of other insurers with sicker ones.

President Donald Trump’s administration has used its regulatory powers to undermine the ACA on multiple fronts after the Republican-controlled Congress last year failed to repeal and replace the law propelled by Democratic President Barack Obama. About 20 million Americans have received health insurance coverage through the program known as Obamacare.

America’s Health Insurance Plans (AHIP), a trade group representing insurers offering plans via employers, through government programs and in the individual marketplace, said the CMS suspension would create a “new market disruption” at a “critical time” when insurers are setting premiums for next year.

“It will create more market uncertainty and increase premiums for many health plans – putting a heavier burden on small businesses and consumers, and reducing coverage options. And costs for taxpayers will rise as the federal government spends more on premium subsidies,” AHIP said in a statement.

It could also encourage more insurers to bow out of Obamacare.

“This is occurring right at the time of year that people (insurers) are making decisions about whether to participate in the exchanges and what premiums to charge if they do,” said Eric Hillenbrand, a managing director at consultancy AlixPartners. “This will affect their thinking on both of those decisions.”

The Centers for Medicare and Medicaid Services (CMS), which administers ACA programs, said on Saturday that months-old conflicting court rulings related to the risk adjustment formula prevent them from making payments.

CMS administrator Seema Verma said in a statement the administration was “disappointed” in the February ruling and that CMS has asked the court to reconsider and “hopes for a prompt resolution that allows CMS to prevent more adverse impacts on Americans.”

But supporters of the ACA criticized the CMS announcement as the latest move by the Trump administration to undermine Obamacare.

“We urge the Trump administration to back off of this dangerous and destabilizing plan, and instead begin working on bipartisan solutions to make coverage more affordable,” said Brad Woodhouse, the executive director of Protect Our Care, a progressive group that supports Obamacare.

The administration has made several other moves in recent years to scale back or halt implementation of certain aspects of the ACA.

Late last year, it said it would halt so-called cost-sharing payments, which offset some out-of-pocket healthcare costs for low-income patients.

It has also scaled back the advertising budget for Obamacare healthcare plans during the open-enrollment period by about 90 percent.

“What you are effectively doing is dismantling pieces of [the ACA] without replacing them,” Hillenbrand said. “It moves us back to some extent to the status quo where people with pre-existing conditions found it very difficult to get insurance.”