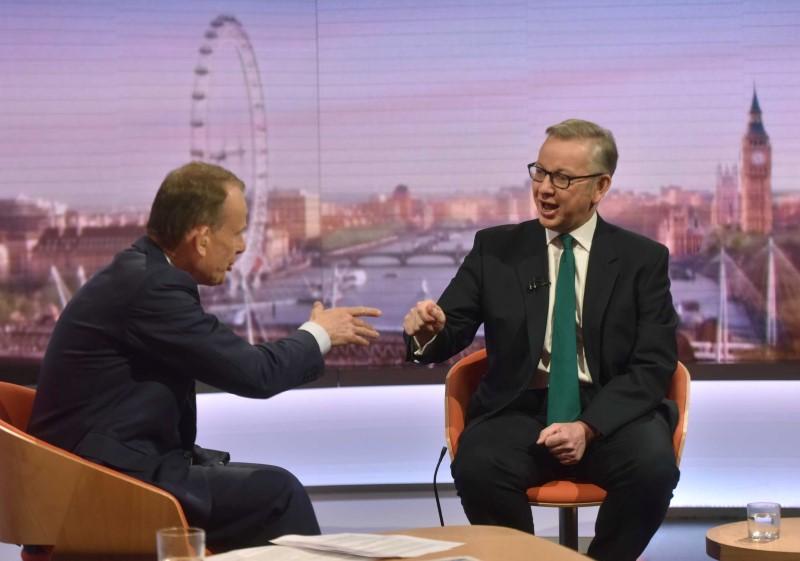 LONDON (Reuters) – One of Britain’s most vocal anti-EU cabinet ministers publicly endorsed Prime Minister Theresa May’s plan to keep Britain in a free trade zone for goods with the EU, a sign she has so far averted a revolt against a new proposal for a soft Brexit.

May unveiled the plan at a closed door government meeting on Friday, siding with those in her divided cabinet who favour closer ties with Europe while ordering those who support a cleaner break to back her policy or quit.

Environment Secretary Michael Gove, one of the highest-profile Brexit campaigners in the cabinet, took to TV to endorse the plan, as critics inside and outside the ruling Conservative Party started to attack the proposal.

“I am a realist,” Gove told the BBC’s Andrew Marr show.

May managed to unite her cabinet to agree to the compromise on Friday after eight hours of talks at her country residence, which news reports say included robust criticism from Foreign Secretary Boris Johnson.

The BBC quoted Johnson as telling his colleagues that the plan was a “big turd” that would need to be “polished” in order to be sold to the public, although he fell into line by the end of the day.

For May, it was a hard-won victory. The Sunday Times said seven of the 27 ministers present spoke out against the plan.

Her strategy pushes to keep Britain inside a free-trade area for goods with the EU, while also committing to ending the free movement of people and the supremacy of the European court. It could disappoint Brexit campaigners by effectively limiting Britain’s ability to regulate some of its own industries, since rules for goods could not differ sharply with EU rules.

Ireland’s foreign minister said on Sunday the proposal was a significant move towards a much less disorderly Brexit, though tough negotiations still lie ahead.

“I think for the first time we’re seeing very direct language which points to a much softer Brexit than I think some people have been commenting on, and that has to be welcomed,” Simon Coveney told national broadcaster RTE.

“I don’t think they (the EU) will accept it in full but I hope it can be the basis for a serious negotiation now.”

“The EU has always said that once Britain softens its red lines … that they would also show some generosity and flexibility but I think there will be limitations to that flexibility.”

Gove said the proposal would still give Britain autonomy from EU institutions and structures, while also having a free-trade agreement that would work in the interest of business.

“(In) all of the important areas where an independent country chooses to exercise sovereignty, Britain will be able to do so,” Gove said, adding the plan respected the referendum result to leave the EU.

But there were signs of a backlash among some lawmakers from May’s Conservative Party on Sunday, including the party’s most visible anti-EU campaigner outside the cabinet, Jacob Rees-Mogg. He said the proposal could be worse than Britain leaving the bloc with no deal.

“That is not something that this country voted for, it is not what the prime minister promised,” he told BBC radio.

He said customs arrangements at the heart of the proposal were “unworkable” and a “bureaucratic nightmare that was not going to work”.

Starmer said May’s proposal had not met Labour’s demands for a comprehensive customs union and a single-market deal with shared institutions and regulations.

Labour’s opposition, combined with complaints from some of the Conservatives’ strongly anti-EU faction, means May could face a tough task in getting lawmakers to back a final deal.

The compromise also is not certain to go down well in Brussels. The EU’s chief Brexit negotiator, Michel Barnier, welcomed the agreement on Friday but added on Twitter: “We will assess proposals to see if they are workable and realistic”.

German manufacturers said on Sunday the plan did not go far enough to guarantee the free movement of goods. May still wants to be able to agree separate trade agreements with non-EU countries, while Britain would collect customs duties on behalf of the EU.

“It is not practicable in customs terms to guarantee free goods transit between the EU and Britain as well as own free trade agreements with third countries, as Britain wants,” said Thilo Brodtmann, head of Germany’s Mechanical Engineering Industry Association (VDMA).

“Britain’s idea of collecting customs on imports from third countries would be very bureaucratic and throw the gates wide open to customs fraud.”