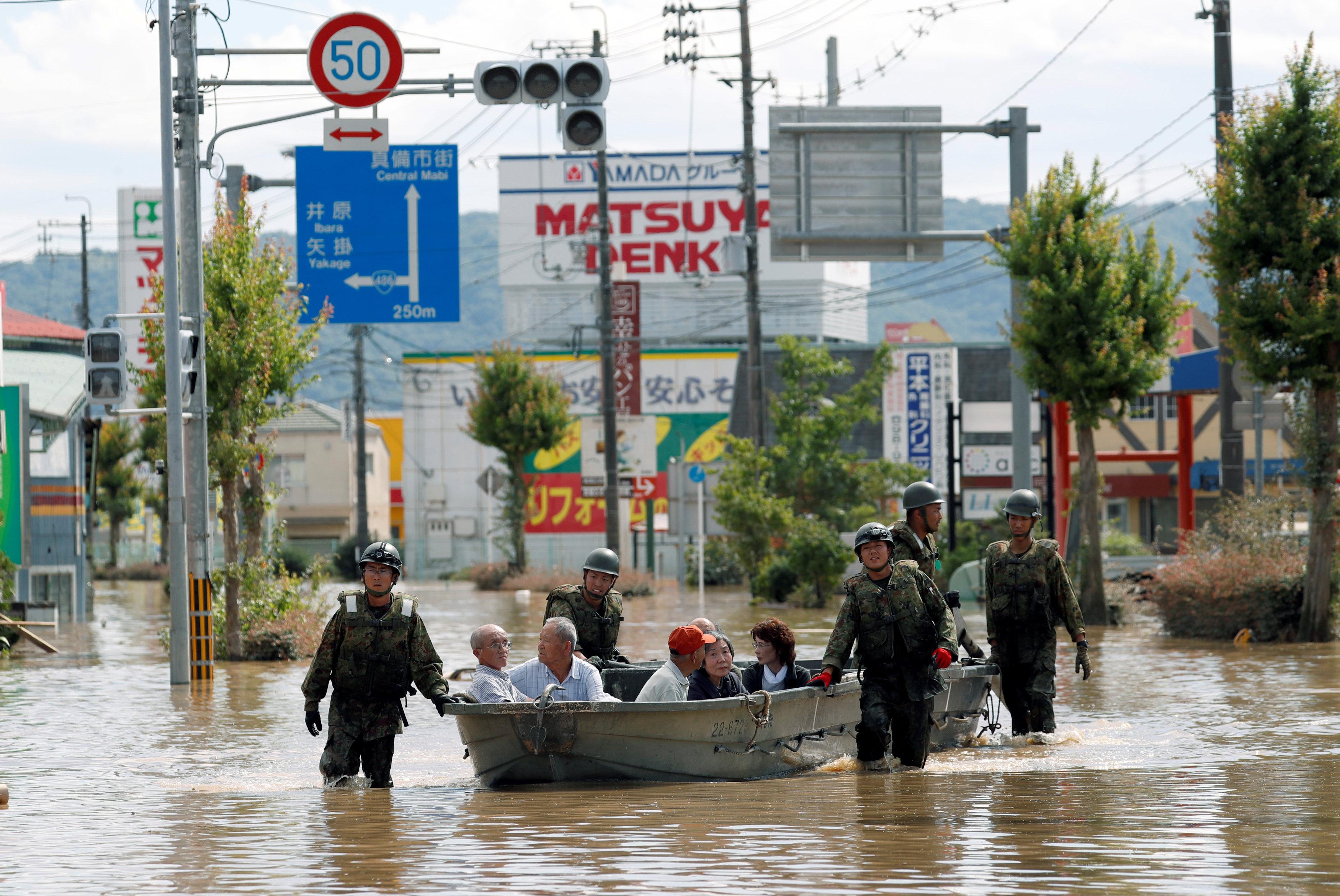 KURASHIKI, Japan (Reuters) – Unprecedented rains that have killed at least 69 people also stranded 1,850 in the western Japanese city of Kurashiki on Sunday, including about 130 at a hospital, with rescuers using helicopters and boats after rivers surged over their banks.

Kurashiki, with a population of just under 500,000, has been hit hardest by the torrential rains that pounded some parts of western Japan, causing the highest death toll since 2014.

Scores of patients, some still in their pajamas, and nurses were rescued from the isolated Mabi Memorial Hospital in boats rowed by members of Japan’s Self Defense Forces.

“I’m most grateful to rescuers,” said Shigeyuki Asano, a 79-year-old patient who spent a night without electricity or water.

“I feel so relieved that I am now liberated from such a bad-smelling, dark place,” said Asano.

A city official said 170 patients and workers had been evacuated from the hospital and another 130 people, including 70 patients, were waiting to be rescued.

Television footage showed a massive rescue operation, with some 1,850 people isolated in the city, according to public broadcaster NHK. Kyodo news reported that most people had been rescued in the city by 1400 JST (0500 GMT)

The overall death toll from the rains in Japan rose to at least 69 on Sunday after floodwaters forced several million people from their homes, media reports and the Fire and Disaster Management Agency said.

The death toll is the highest caused by water disasters since 2014 when 77 people were killed in heavy rain which set off landslides in Hiroshima in western Japan.

Another 61 were missing, NHK said, and more rain was set to hit some areas for at least another day.

The rain set off landslides and flooded rivers, trapping many people in their houses or on rooftops.

“We’ve never experienced this kind of rain before,” an official at the Japanese Meteorological Agency (JMA) told a news conference. “This is a situation of extreme danger”.

Among the missing was a 9-year-old boy believed trapped in his house by a landslide that killed at least three others, including a man in his 80s.

“All I have is what I’m wearing,” a rescued woman clutching a toy poodle told NHK. “We had fled to the second floor but then the water rose more, so we went up to the third floor”.

Japan’s government set up an emergency management center at the prime minister’s office and some 54,000 rescuers from the military, police and fire departments were dispatched across a wide swath of southwestern and western Japan.

“There are still many people missing and others in need of help, we are working against time,” Prime Minister Shinzo Abe said.

Emergency warnings for severe rain had been lifted by evening, but there were still advisories for heavy rain and landslides.

Evacuation orders stayed in place for nearly 2 million people and another 2.3 million were advised to evacuate, although rain had stopped and floodwaters receded in some areas.

Landslide warnings were issued in more than a quarter of Japan’s prefectures.

The rain began late last week as the remnants of a typhoon fed into a seasonal rainy front, with humid, warm air from the Pacific making it still more active – a pattern similar to one that set off flooding in southwestern Japan exactly a year ago that killed dozens. The front then remained in one place for an unusually long time, the JMA said.

Automakers including Mazda Motor Corp (7261.T) and Daihatsu Motor Co suspended operations at several plants on Saturday due to a shortage of parts or dangerous conditions. They were to decide later on Sunday on plans for the coming week.

Electronics maker Panasonic Corp (6752.T) said one plant in Okayama, western Japan, could not be reached due to road closures, although it had been closed for the weekend anyway. A decision about next week would be made on Monday, it said.

While the Japanese government monitors weather conditions closely and issues warnings from an early stage, the fact that much of the country outside major cities is mountainous and building takes place on virtually every bit of usable land leaves it vulnerable to disasters.