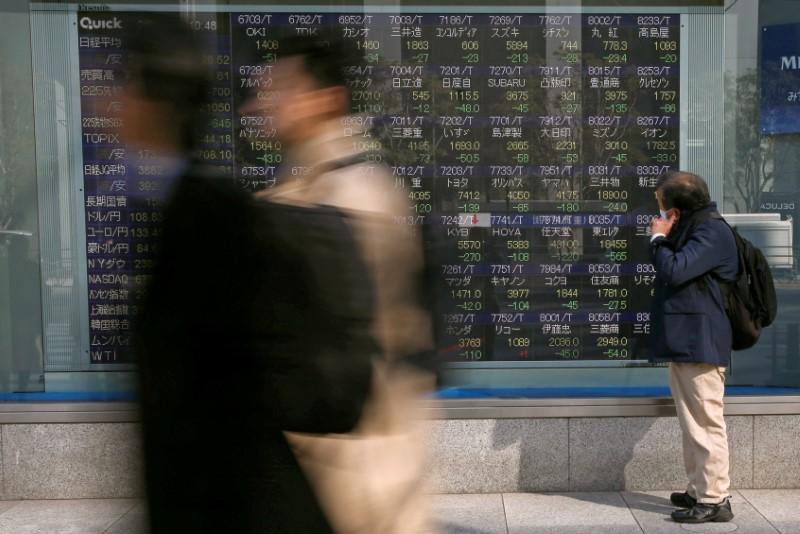 SYDNEY (Reuters) – Asian share markets rallied on Monday as favorable U.S. jobs data whetted risk appetites, while sterling slipped after two members of the British government resigned over Brexit and put the future of Prime Minister Theresa May in doubt.

FILE PHOTO: A man looks at an electronic stock quotation board outside a brokerage in Tokyo, Japan February 9, 2018. REUTERS/Toru Hanai

The pound peeled off around a third of a U.S. cent to $1.3290 GBP=D3 as news broke British Brexit Secretary David Davis and Brexit Minister Steven Baker had resigned.

The loss came just two days after a meeting at May’s Chequers country residence supposedly sealed a cabinet deal on Brexit and underlines the deep divisions in her ruling Conservative Party over the departure from the EU.

“The outlook for the pound had brightened in recent weeks,” said Westpac senior currency analyst Sean Callow, seeing a chance this could turn out positive for the currency.

“If the U.K. government presses ahead with this plan despite the unexpected resignation of “hard Brexit” officials and with the US dollar losing momentum, sterling should be able make a run at $1.35 multi-day.”

“The combination of rising employment and increased labor force participation suggests healthy but not tightening labor market conditions in June, something that will allow the Fed to continue to hike rates at a gradual pace,” said Kevin Cummins, a senior U.S. economist at RBS.

The balanced report helped Wall Street end last week in the black and Japan’s Nikkei .N225 followed up with gains of 1.4 percent on Monday.

MSCI’s broadest index of Asia-Pacific shares outside Japan .MIAPJ0000PUS climbed 1.1 percent, on top of 0.7 percent rally on Friday when the launch of U.S. tariffs on Chinese imports came and went without too many fireworks.

“For now, overall policies and financial conditions still support growth and investment,” he added. “A sharper-than-expected China slowdown from a domestic credit crunch and external trade tensions could be the main risk to global growth.”

Chinese shares were attempting to rally on Monday with the Shangahi blue chip index .CSI300 up 1.9 percent after hitting its lowest in almost 18 months last week.

China’s securities regulator said on Sunday it plans to ease restrictions on foreign investment in stock listed on the Shanghai or Shenzhen exchanges to attract more foreign capital and support the economy.

The focus this week would be on Chinese data for June covering inflation, new loans and international trade. The United States also releases inflation figures, while the Bank of Canada might well hike rates on Wednesday.

In currency markets, the U.S. dollar was mostly softer following the jobs report, with sterling being an exception.