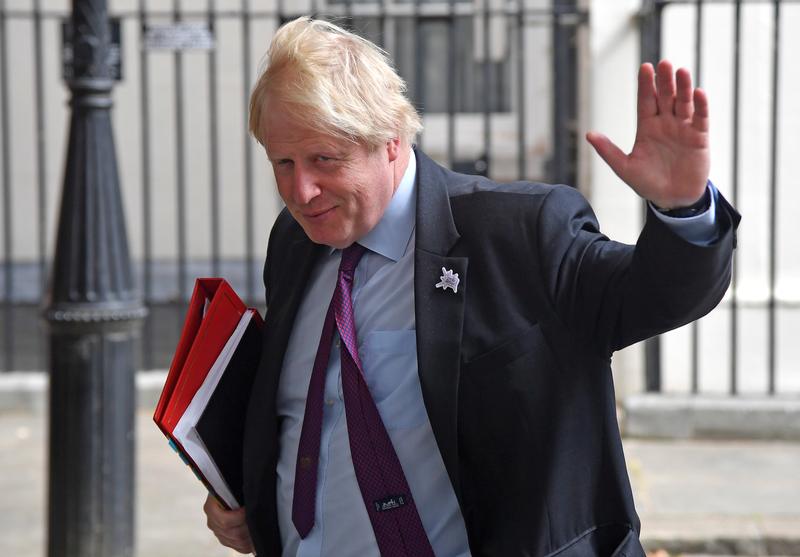 LONDON (Reuters) – Prime Minister Theresa May’s foreign minister and Brexit negotiator quit on Monday in protest at her plans to keep close trade ties with the European Union after Britain leaves the bloc, stirring rebellion in her party’s ranks.

Foreign Secretary Boris Johnson, the face of Brexit for many, resigned just hours after Brexit minister David Davis, emboldening some in her Conservative Party to mull a plot to unseat her less than nine months before Britain exits in March.

The two departures seemed to shatter May’s own proclamation of cabinet unity last Friday, when she said she believed she had, after two years of wrangling, secured agreement on Britain’s biggest foreign and trading policy shift in almost half a century.

But as Monday drew to a close, May was cheered and applauded by many Conservative lawmakers at a private meeting, having earlier spent more than two hours in parliament answering sometimes hostile questions.

Both eurosceptics and loyalists said she had stood her ground and appeared to have kept her job, at least for now, as the government tries to prepare for the next stage of negotiations with Brussels.

The resignations have fostered a deep distrust among many eurosceptics in her party, undermining her position and casting doubt over the Brexit process.

“Brexit should be about opportunity and hope,” Johnson said in a resignation letter. “That dream is dying, suffocated by needless self-doubt.”

In response, May said she was a “little surprised” to receive his resignation after last Friday’s cabinet agreement. She appointed in his place Jeremy Hunt, an ally who voted to remain in the EU in the 2016 referendum. Hunt, a long-serving health minister, is replaced by culture minister Matt Hancock.

In his letter, Johnson complained about how “crucial decisions” had been postponed, leading to what he described as a “semi-Brexit” with Britain unable to diverge, or move away, from rules and regulations set in Brussels. “In that respect we are truly headed for the status of colony.”

By late afternoon, the pound was down against the dollar GBP=D3 and the euro GBPEUR= after the resignation of Johnson, figurehead of the referendum campaign to quit the EU.

Davis had earlier called May’s plan dangerous and said it would give “too much away, too easily” to EU negotiators. May replaced him with another Brexit campaigner, junior minister Dominic Raab.

It was a rocky day for May, weakened after she lost the Conservatives’ majority in parliament in an ill-judged election last year.

But at the meeting of her party in parliament, May was cheered several times and business minister Greg Clark, who supports her pitch for a business-friendly Brexit, said it had gone “very well”.

May signalled that, after finally nailing her colours to a vision for Brexit, she had decided to face down the dissenters, who do not form a majority in parliament.

She defended her Brexit plan in the chamber, even gently poking fun at the rows her party has had over the referendum vote and the wider European issue that also helped to bring down previous Conservative prime ministers Margaret Thatcher, John Major and May’s predecessor, David Cameron.

“In the two years since the referendum, we have had a spirited national debate, with robust views echoing around the cabinet table as they have on breakfast tables up and down the country,” she said.

May’s spokesman said she would fight any attempt to unseat her.

May also called on Brussels to engage with her Brexit proposal or risk Britain crashing out without a deal.

“What we are proposing is challenging for the EU, it requires them to think again, to look beyond the positions they have taken so far and agree a new and fair balance of rights and obligations,” she said.

But with just over three months before the EU says it wants a deal, European Council President Donald Tusk raised the idea that Brexit might be called off.

“Politicians come and go but the problems they have created for people remain,” he tweeted. “I can only regret that the idea of Brexit has not left with Davis and Johnson. But … who knows?”

May had been reluctant to spell out her strategy until now precisely for fear of igniting such furious rows.

Many eurosceptics accused her of siding with the “Remainers” in her cabinet – those who voted in 2016 to stay in the EU and have demanded a Brexit that would preserve the complicated supply chains used by many of Britain’s biggest companies.

They fear a clean break would cost jobs. But the ardent Brexit supporters say the deal May is now proposing to negotiate could leave Britain still accepting EU rules and regulations, but without being able to influence them.

May insisted that her proposals would honour the will of the people as expressed in the referendum by ending free movement of EU citizens to Britain, the jurisdiction of the European Court and “vast” payments to the bloc.

She said she would now focus on moving the exit negotiations on – a step EU officials and businesses have long called for. And she reiterated her position that there would be no further referendum on the final deal to leave the EU, or any attempt to put back the exit date of March 29, 2019.

But it remains unclear whether the EU will accept her negotiating bid on a free trade area for goods.