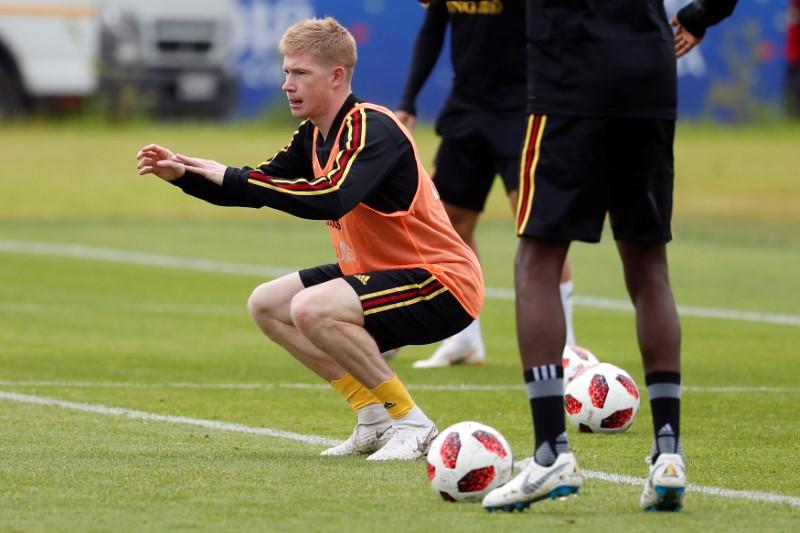 ST PETERSBURG (Reuters) – France meet Belgium in a World Cup semi-final on Tuesday. Here is a look at some of the key head-to-head duels which could prove decisive.

De Bruyne is one of the most astute passers of the ball in the game, and one of its best long-range marksmen. Brazil simply could not cope with him in the first half of their quarter-final.

On Tuesday, however, he will come up against one of the world’s best defensive midfielders in a battle that could go a long way to deciding the outcome.

Kante covers a remarkable amount of ground, his reading of the game is exceptional, and he is unlikely to be pulled around by De Bruyne in the same way that Fernandinho was in the quarter-final. Both play in England’s Premier League and have come up against each other before.

France have conceded only three goals on the way to the semi-finals, and the central defensive pair snuffed out the attacking threat of Luis Suarez in the quarter-final against Uruguay, barely allowing him a touch in the penalty area.

They will now aim to stop Lukaku adding to his tally of four goals in the tournament. The powerful striker has proved a handful, not just for his goals but also for his role as a target man and in opening up space for Eden Hazard and De Bruyne.

Lukaku led the counter-attack which led to Belgium’s second goal against Brazil in the quarter-final and also set up their winner against Japan in the second round with an astute, unselfish dummy.

As the left-sided player in Belgium’s three-man defense, Jan Vertonghen is likely to find himself as the man tasked with stopping French teenager Kylian Mbappe.

Vertonghen is an experienced campaigner and seen as one of Belgium’s most dependable players. But Mbappe’s powerful runs from midfield destroyed Argentina in the second round, and his pace is likely to stretch the 31-year-old Vertonghen to the limit.

Hazard has arguably been the outstanding player of the tournament and pulled Brazil and their right back Fagner around the field in their quarter-final.

France right back Pavard, 22, was a surprise inclusion in their squad, but he has had an excellent World Cup so far, capped by him scoring one of the goals of the tournament in the 4-2 win over Argentina.

He now faces his biggest test so far in trying to stop the Belgian number 10.