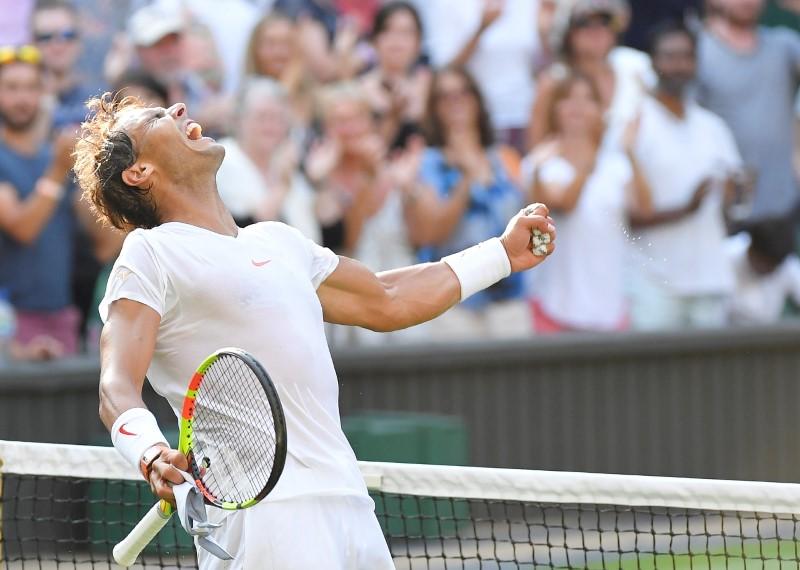 LONDON (Reuters) – The bar was set absurdly high by the time Rafael Nadal walked onto Centre Court on Monday but the Spaniard responded with a sensational 6-3 6-3 6-4 defeat of Jiri Vesely to reach the Wimbledon quarter-finals.

His great rival Roger Federer had already maintained his regal progress earlier on the showcourt and Serena Williams then followed with another thumping win.

Nadal, whose 17 Grand Slam titles are eclipsed by Federer’s 20 and the 23 owned by Williams, did not disappoint in the late afternoon sunshine as he dissected fellow left-hander Vesely with a typically rumbustious display.

The 32-year-old was made to work just hard enough by the Czech, who is clearly more dangerous than his 93rd ranking suggests but he never looked in any danger of not booking a last eight spot — which he did for the first time since 2011.

A single break of serve was all Nadal required in the opening set and he broke twice in the second.

At times it appeared the number two seed was playing on his beloved clay, such was the spin and bounce he extracted from the turf, but there was a brief hiccup in the third set.

The powerful Vesely broke for a 3-2 lead when a rare Nadal forehand error drew gasps of surprise from the crowd.

The Spaniard hit back immediately though and sealed victory on his third match point when Vesely served at 4-5.