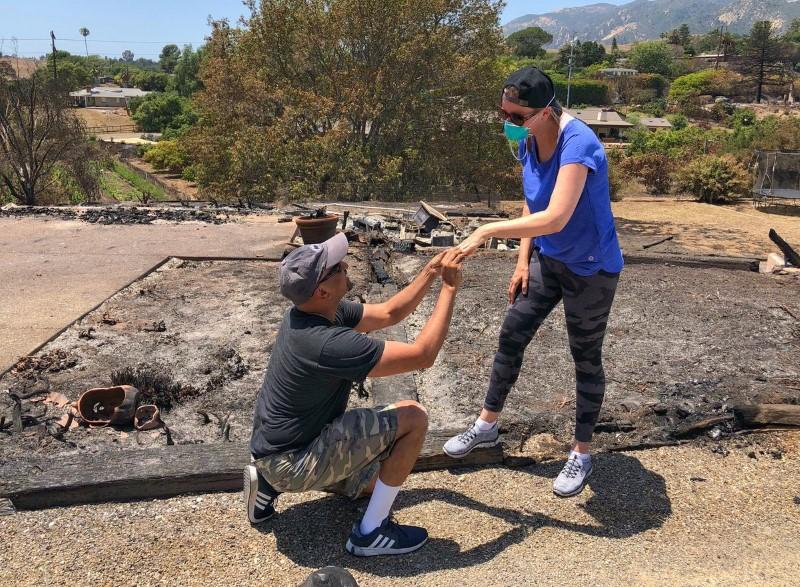 (Reuters) – As wildfires destroyed dozens of homes and forced the evacuation of thousands of residents in California, at least one couple had a bit of good news.

Ishu and Laura Rao, return to the rubble of their home which they lost in a wildfire, to retrieve their wedding ring, in Alameda, California, U.S., in this July 8, 2018 photo obtained from social media. MANDATORY CREDIT. Mike Eliason/Santa Barbara County Fire Department/via REUTERS

She had taken them off before going to sleep Friday and had no time to retrieve them when the couple escaped the fast-moving blaze Holiday Fire with Ishu’s two daughters, their three dogs and a cat, said Mike Eliason, a spokesman with the Santa Barbara County Fire Department.

The married couple of eight months were escorted back to their property Sunday to hunt for the rings.

“Wouldn’t have believe it, but they found them,” Eliason said. They were damaged and charred, but still recognizable.

Ishu Rao then dropped to one knee, put the rings on her finger and proposed all over again. The rings still fit, Eliason said, “And she said yes.”

A wedding ring belonging to Ishu and Laura Rao, is retrieved from the rubble of their home which they lost in a wildfire, in Alameda, California, U.S., in this July 8, 2018 photo obtained from social media. MANDATORY CREDIT. Mike Eliason/Santa Barbara County Fire Department/via REUTERS

Elsewhere, some firefighters were gaining ground in containing the wildfires in California early Monday. Others just held the lines against the blazes feeding off the dry brush in the California heat, officials said.

Firefighters should get some more good news this week with cooler temperatures, the National Weather Service said. Scorching heat, high winds and low humidity have fanned dozens of fires across the western United States this summer.

The fires had burned more than 2.9 million acres (1.17 million hectares) through Friday, already more than the annual average of about 2.4 million acres over the past 10 years, according to the National Interagency Fire Center.

The remains of an unidentified person were found on Friday near a home burned to the ground by the Klamathon Fire, which broke out on Thursday near California’s border with Oregon. It marked the first fatality of the fire season in California.

A firefighter was injured battling the blaze but has since been released from the hospital, authorities said at a news conference on Sunday night.

The Klamathon Fire, which has destroyed 81 structures and blackened about 35,000 acres, was 25 percent contained on Sunday evening, according to Cal Fire. More than 1,500 people have been affected by the flames.

Elsewhere in Northern California, the County Fire has charred more than 90,200 acres in sparsely populated wooded areas of Napa and Yolo Counties.

Some 2,800 firefighters faced with inaccessible terrain, high temperatures and low humidity, were battling the fire, which was 65 percent contained.