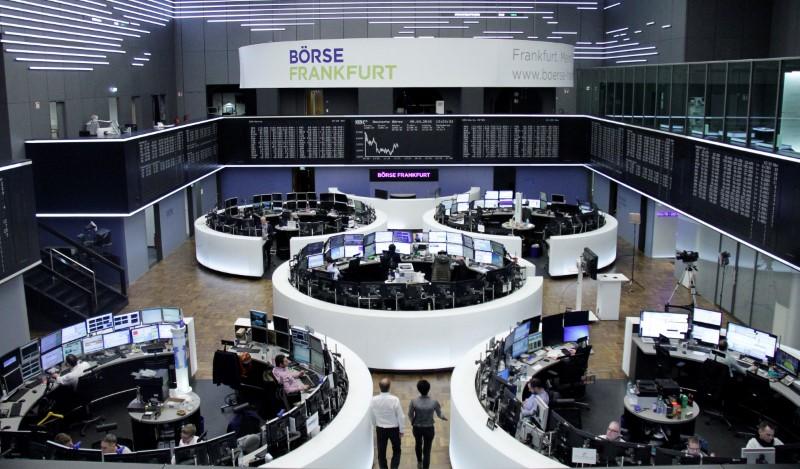 NEW YORK (Reuters) – Global stocks hit a two-week high on Monday, led by a rise in bank shares ahead of earnings reports from the biggest U.S. lenders later in the week, while sterling took a hit after another British cabinet resignation left Prime Minister Theresa May’s Brexit plans in chaos.

The German share price index, DAX board, is seen at the stock exchange in Frankfurt, Germany, March 9, 2018. REUTERS/Staff/Remote

The MSCI world equity index .MIWD00000PUS, which tracks shares in 47 countries, rose 0.86 percent. Wall Street notched a third straight day of gains as the market looked past the tit-for-tat trade battle under way between Washington and Beijing.

The S&P 500 Index .SPX gained 0.88 percent, led by a nearly 3 percent surge in bank stocks .SPXBK, their biggest daily rise since March. JPMorgan (JPM.N), Wells Fargo (WFC.N) and Citigroup (C.N) are all due to report quarterly results on Friday.

Overall, S&P 500 profits appear on track for another quarter of year-over-year growth greater than 20 percent, according to Thomson Reuters estimates. That has helped blunt concerns about the deteriorating global trade scene after the United States and China slapped tariffs on some $34 billion of each other’s goods on Friday.

European and Asian stocks also rose, with the pan-European STOXX 600 index gaining 0.58 percent, led by a strong bounce across mining and energy stocks.

MSCI’s broadest index of Asia-Pacific shares outside Japan .MIAPJ0000PUS climbed 1.35 percent, following a 0.7 percent rally on Friday when the launch of U.S. tariffs on Chinese imports came and went without too many fireworks.

The pound GBP= lost ground after Foreign Minister Boris Johnson added his name to the clutch of British cabinet ministers to quit in protest over Prime Minister Theresa May’s plan for leaving the European Union.

Sterling had been whipsawed a bit by the two other ministerial departures, including Brexit Minister David Davis on Sunday, but Johnson’s announcement pulled the rug out, calling into question May’s ability to deliver the vision of continued close ties with the European Union that she said they had agreed to last week.

The pound dove more than 1 percent at one point before partially recovering to stand 0.29 percent below Friday’s close.

Britain’s FTSE .FTSE gained 0.92 percent, helped by the currency’s weakness, although analysts said the political tensions were no positive for stocks in the longer term.

The drop in sterling helped cushion the dollar more broadly against a basket of currencies, with the dollar index firming fractionally to 94.086 .DXY. The euro was near the unchanged mark at $1.1749 EUR=.