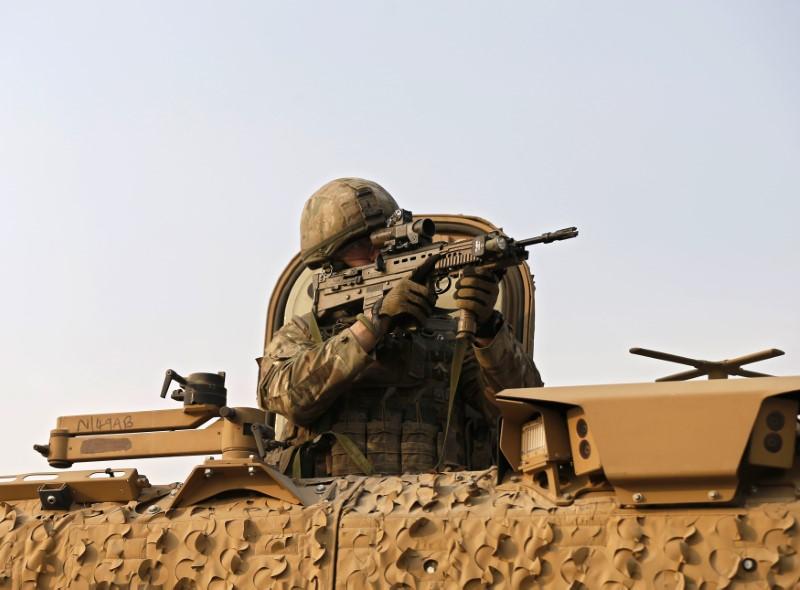 LONDON (Reuters) – The British government is planning to almost double the number of its troops in Afghanistan after a request from U.S. President Donald Trump for reinforcements to help tackle the fragile security situation there.

A British soldier points his weapon at the site of a suicide attack in Kabul January 5, 2015. REUTERS/Mohammad Ismail

Prime Minister Theresa May announced the government will send an extra 440 troops, which would bring Britain’s total to about 1,100, to help Afghan troops fighting Taliban and Islamic State insurgents.

The extra troops will be taking part in a NATO-led training mission, called Resolute Support, to train and assist Afghan forces. They will be based in Kabul and will not be in a combat role. British troops ended combat operations in 2014.

The announcement comes the day before a NATO summit in Belgium that could turn contentious over U.S. President Donald Trump’s insistence that allies pay more for their defence.

Trump, who announced the United States would send thousands more troops to Afghanistan last year, has asked Britain and other NATO countries to send more reinforcements to the country.

“In committing additional troops to the Train Advise Assist operation in Afghanistan we have underlined once again that when NATO calls the UK is among the first to answer,” May said.

“NATO is as vital today as it ever has been and our commitment to it remains steadfast. The Alliance can rely on the UK to lead by example.”

The increase in British troops comes ahead of parliamentary elections in Afghanistan in October, which are seen as a crucial test for democracy in a country at war for four decades.

The extra British troops will initially come from the Welsh Guards, with around half arriving in August and the rest in February next year.

Hundreds of civilians have been killed and wounded in attacks in Kabul this year. At least 57 people were killed when a suicide bomber blew himself up outside a voter registration booth in April and about 100 people were killed in January by a bomb in an ambulance.

Thousands more U.S. troops have been sent to Afghanistan to help train the army, and commanders have been given greater authority to carry out air strikes against the militants in a major reversal of the previous policy of phased withdrawal of American forces.

But almost 17 years since the United States tried to topple Afghanistan’s Taliban, who had harboured al Qaeda militants behind attacks on New York and Washington, the West remains entangled in an effort to stabilise the country.