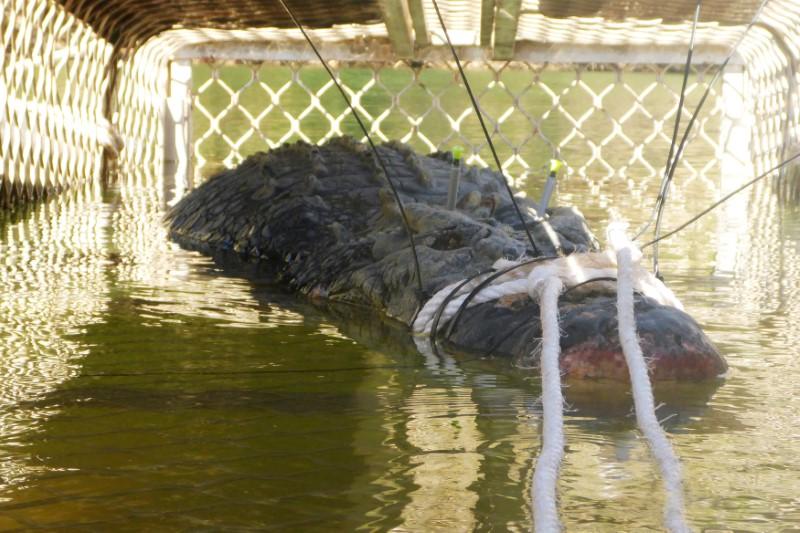 SYDNEY (Reuters) – Authorities in Australia have caught a saltwater crocodile measuring almost 5 meters (16.4 ft), one of the biggest on record, to stop it from reaching a populated area, the Department of Tourism said on Tuesday.

Weighing up to 600 kg (1,322 lb), the 60-year old crocodile is the biggest ever removed from the Katherine River in the remote Northern Territory.

It was moved to live out its days at a crocodile farm.

The largest crocodile ever captured in Australia measured 6.4 meters, according to records. It was caught and killed in 1974, also in the Northern Territory.

Rangers caught the 4.7 meter (15.4 feet) male crocodile 60 km (37 miles) downstream from the town of Katherine, on Monday after sedating it, media reported. They had been hunting it since they first spotted it in 2010.

“He was removed downstream from Katherine to help prevent human interaction in the more populated areas,” said Tracey Duldig, acting director of the Department of Tourism and Culture.

“He has been taken to a croc farm in the Katherine region.”

Known for its exotic and sometimes dangerous wildlife such as sharks and Tasmanian devils, Australia is home to over 150,000 crocodiles.

Authorities routinely move them away from people.

In 2017, 371 crocodiles were captured by rangers in the Northern Territory cities of Darwin, Palmerston and Katherine alone, according to the department’s website. This year, 190 have been captured.

A near 5-metre crocodile that was captured in Taylor’s Park in the Northern Territory, Australia is seen in this undated image obtained July 10, 2018. AAP Image/Supplied by Northern Territory Parks and Wildlife via REUTERS