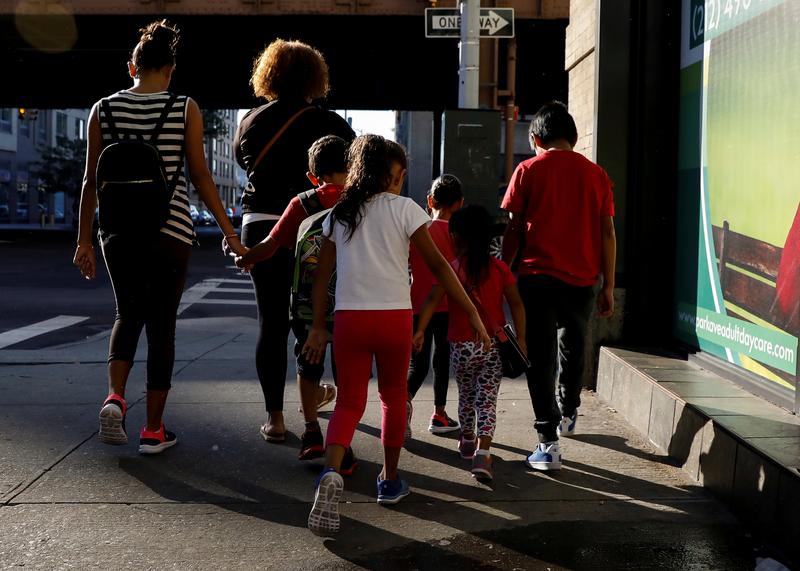 SAN DIEGO (Reuters) – The U.S. government must reunite 63 children under the age of five who were separated by immigration officials after crossing into the United States from Mexico as soon as Tuesday or face penalties, a federal judge said.

Children are escorted to the Cayuga Center, which provides foster care and other services to immigrant children separated from their families, in New York City, U.S., July 10, 2018. REUTERS/Brendan McDermid

U.S. Judge Dana Sabraw in San Diego told government attorneys he was sticking with deadlines he set last month, when he ordered children under five to be reunited Tuesday and another 2,000 to be back with their parents by July 26.

“These are firm deadlines. They are not aspirational goals,” said the judge.

The children were taken from their parents under President Donald Trump’s “zero tolerance” immigration policy, which called for the prosecution and detention of adult immigrants crossing the border without authorization.

Sabraw also asked the American Civil Liberties Union, which brought the lawsuit that led to Sabraw’s June order, to file papers on Thursday suggesting remedies if the government had not reunified the 63 children by Tuesday “or within immediate proximity of today.”

The judge did not suggest what penalties could be applied.

“The court has a range of options from significant fines to other types of relief,” said ACLU attorney Lee Gelernt.

The government had asked Sabraw to extend the deadlines because it needed time to test DNA to confirm family relationships, run background checks, locate parents who were released from custody and review parental fitness.

In court filings, the ACLU has said the government is asking for needless provisions for reuniting families that would not happen if the families had not been separated in the first place.

Children are escorted to the Cayuga Center, which provides foster care and other services to immigrant children separated from their families, in New York City, U.S., July 10, 2018. REUTERS/Brendan McDermid

Sabraw’s order included exceptions that might threaten the safety of the child. As a result, the number of children eligible to be reunited has shifted in recent days as the government has discovered some individuals were not parents as they claimed or had criminal records.

Many of the separated children are fleeing violence in Guatemala, Honduras and El Salvador, and U.S. Homeland Security Secretary Kirstjen Nielsen met with diplomats from those countries in Guatemala on Tuesday to discuss U.S. immigration policies.

Some lawyers representing the separated children, who have been scattered into foster systems across the country, said the government was not telling them what would happen to their young clients.

The Legal Aid Society in New York said it is representing at least two separated children under 5 years old that meet the judge’s criteria for reunification on Tuesday.

One boy, from El Salvador, was due to be released to his mother, according to Beth Krause, the supervising attorney of Legal Aid’s Immigrant Youth Project.

“I have no details about where, when, under what conditions,” she wrote in an email on Tuesday morning. The other boy, a Honduran, would remain with a foster family while the father remained in government custody, although it was not clear to her why.

“I know very very little about this case,” she said. “It’s all very frustrating.”

Trump was dismissive of reporters’ questions about the missed deadline on Tuesday.

“Tell people not to come to our country illegally,” he said. “That’s the solution.”

Some of the separated families arrived at U.S. ports of entry seeking asylum, which is not illegal.