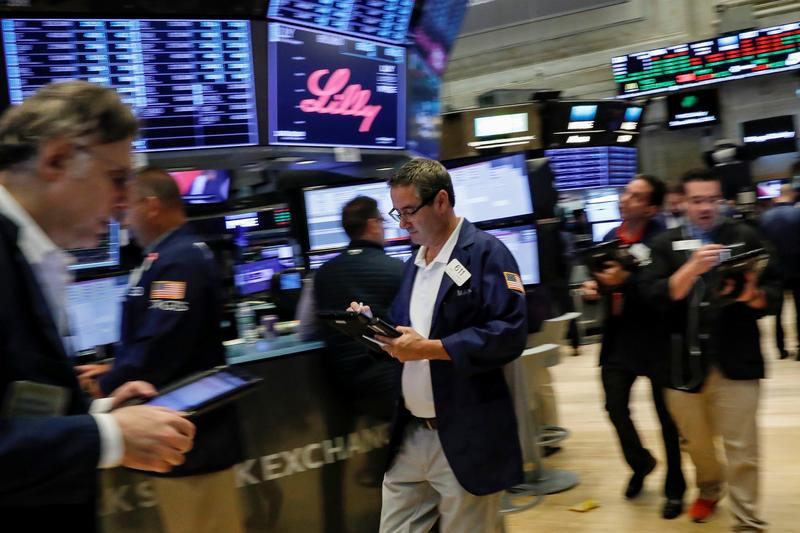 NEW YORK (Reuters) – The S&P 500 rose for a fourth session on Tuesday to post its highest close since Feb. 1, the day before the market began a sharp extended selloff, as strong results from PepsiCo boosted optimism about the earnings season.

The consumer staples index climbed 1.3 percent and provided the biggest lift to the S&P 500, driven by PepsiCo, which gained 4.8 percent, while Procter & Gamble rose 2.5 percent and Coca-Cola was up 1.3 percent.

The benchmark index is now up 4.5 percent since the end of 2017, rising about 3 percent in the four sessions, helped by upbeat news on the economy and earnings.

Worries over rising bond yields and potentially firming inflation drove the early February selloff, which confirmed a correction for the market.

Earnings are expected to become key for investors in the coming weeks as the U.S. reporting period kicks into high gear, shifting the focus away from recent trade tensions. The United States and China slapped tit-for-tat tariffs on $34 billion of each other’s goods on Friday.

“They sold into it (the tariff news), and then it bounced back nicely,” said Alan Lancz, president of Alan B. Lancz & Associates Inc, an investment advisory firm based in Toledo, Ohio.

JPMorgan Chase, Wells Fargo and Citigroup are scheduled to report results on Friday. Their shares dipped on Tuesday after leading market gains on Monday.

The company also reaffirmed its full-year forecast amid signs of a gradual recovery in its soda business.

Overall, S&P 500 companies are expected to post second-quarter profit growth of around 21 percent, slightly higher than what was forecast in April, according to Thomson Reuters data.

To view a graphic on S&P earnings scorecard, click: reut.rs/2NGnzMz

Investors are still, however, expected to parse quarterly reports to gauge the impact of an escalating trade dispute between China and the United States on company earnings.

Also boosting the S&P on Tuesday, utilities and telecom indexes rose about 1 percent each, bouncing back from Monday’s losses.

Shares of Exxon and Chevron were up around 1 percent each.

Nordstrom dropped 2.7 percent after the upscale department store operator issued a bleak sales forecast for the rest of 2018.

Advancing issues outnumbered declining ones on the NYSE by a 1.06-to-1 ratio; on Nasdaq, a 1.53-to-1 ratio favored decliners.

About 5.8 billion shares changed hands on U.S. exchanges. That compares with the 7.0 billion daily average for the past 20 trading days, according to Thomson Reuters data.