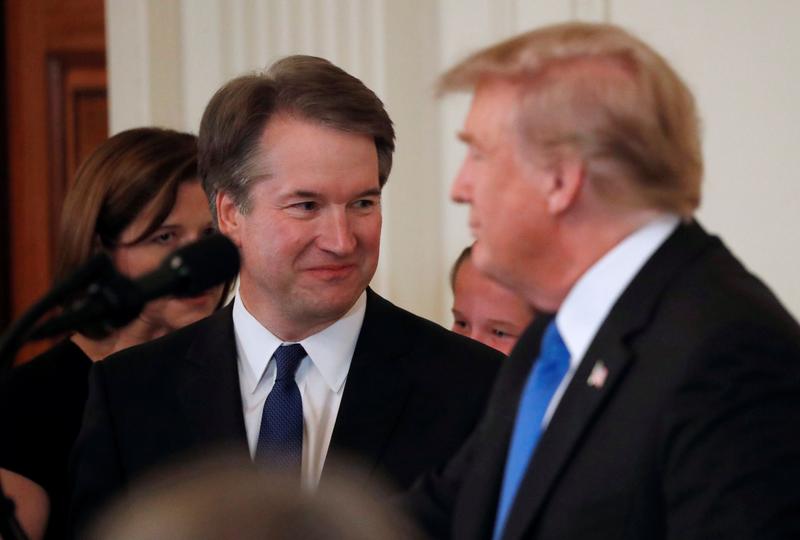 WASHINGTON (Reuters) – Brett Kavanaugh, nominated on Monday to be a Supreme Court justice by U.S. President Donald Trump, is a long-time skeptic of business regulations, especially on rules limiting harmful emissions, although he has called global warming an “urgent” issue.

If confirmed by the Senate, the 53-year-old conservative judge, who is well known in Washington legal circles, could serve for decades and have a major say over environmental regulations issued by future presidents, long after Trump has left office.

Michael Brune, president of the Sierra Club, an environmental activist group, said Kavanaugh is “an extreme ideologue who has time and again proven himself hostile to common-sense environmental safeguards.”

A judge on the U.S. Court of Appeals for the District of Columbia Circuit since 2006, Kavanaugh often hears challenges to regulations brought by business groups such as the U.S. Chamber of Commerce and the National Association of Manufacturers.

“The selection of Judge Kavanaugh shows that the Trump administration is serious about taming the administrative state,” said Jonathan Adler, a law professor at Case Western Reserve University School of Law.

Hydrofluorocarbon manufacturers including Mexichem Fluor Inc, a unit of Mexichem SAB de CV (MEXCHEM.MX) and Arkema Inc, part of Arkema SA (AKE.PA), were part of a coalition that challenged the regulation.

“However much we might sympathize or agree with EPA’s policy objectives, EPA may act only within the boundaries of its statutory authority,” Kavanaugh wrote.

Companies that supported the regulation, including Honeywell International Inc (HON.N), last month filed court papers asking the Supreme Court to reinstate it. If Kavanaugh were confirmed as a Supreme Court justice and the hydrofluorocarbon case came to the court, he would be recused.

No other major emissions case is clearly headed for the Supreme Court’s docket in its next term beginning in October, but Kavanaugh’s record could shape future cases.

In 2012, he disagreed with the Court of Appeals’ decision to uphold the Obama administration’s first efforts to regulate greenhouse gas emissions. The regulations were challenged by business groups and energy companies such as Alpha Natural Resources Inc (APNR.PK), which went through a bankruptcy in 2015, and Massey Energy Co, later bought by Alpha.

When the court refused to reconsider its ruling, Kavanaugh dissented, saying the Environmental Protection Agency (EPA) had exceeded its authority in seeking to regulate carbon emissions under a specific EPA program.

He stopped short of saying that agency could not regulate greenhouse gas emissions altogether, however. “The task of dealing with global warming is urgent and important,” he wrote.

The conservative Supreme Court majority in 2014 agreed with Kavanaugh on the point he raised in the case, although it upheld most of the Obama regulations.

In another environmental case, Kavanaugh in 2014 criticized the Obama administration for not considering the costs of a rule limiting emissions of mercury and other hazardous pollutants, mainly from coal-fired power plants.

“To be sure, EPA could conclude that the benefits outweigh the costs. But the problem here is that EPA did not even consider the costs,” Kavanaugh wrote.

Again, the conservative majority of the Supreme Court later agreed, ruling in 2015 on a 5-4 vote that the Obama administration should have considered compliance costs.