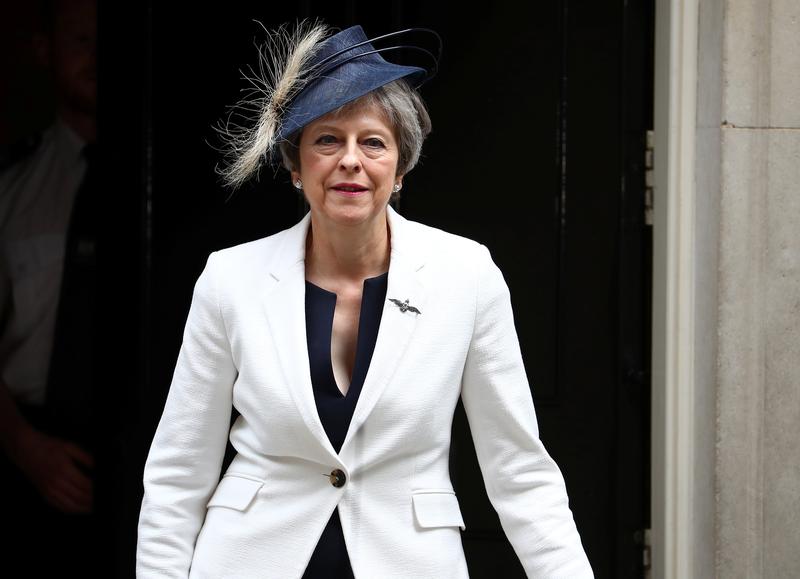 LONDON (Reuters) – British Prime Minister Theresa May holds a meeting of her cabinet on Tuesday, seeking to unify her government a day after it was thrown into turmoil when two senior ministers quit over her plans for trade ties with the European Union after Brexit.

With less than nine months until Britain is due to leave the EU, May has been wrestling with how to enact Brexit without jeopardizing business with the world’s biggest trading bloc of 27 countries whilst forging new global deals.

Her plan for a “a business-friendly” Brexit prompted the resignations of Foreign Secretary Boris Johnson and Brexit minister David Davis, but sterling rebounded as investors bet she would not face an immediate challenge to her leadership.

At a meeting with her Conservative Party lawmakers on Monday, she was cheered and applauded by many as she warned them that internal squabbling could pave the way for socialist opposition leader Jeremy Corbyn to take power instead.

“I think it is right that the cabinet backs the prime minister and speaks with one voice and if people don’t do that then they have to go,” Justice Secretary David Gauke told BBC radio.

Senior lawmakers in her party said they did not expect the prime minister to face a vote of no confidence, although some Conservatives were still saying that she should go.

If May survives the domestic political turmoil, she still has to convince EU leaders that her proposals can work. Europe’s most powerful leader, German Chancellor Angela Merkel, arrives in London later on Tuesday.

May’s proposals for a future EU relationship after Britain departs from the bloc next March had taken two years of internal government wrangling to agree, but within 48 hours Johnson and Davis had resigned saying they could not back the plans. Three junior ministers also quit their posts.

“Brexit should be about opportunity and hope,” Johnson said in a scathing resignation letter that was echoed in headlines in a number of Britain’s national newspapers. “That dream is dying, suffocated by needless self-doubt.”

May, having finally signaled her vision for Brexit, spent two hours in parliament defiantly defending the plans and called for Brussels to engage fully or risk the damaging prospect of Britain leaving the bloc with no deal in place.

Some Conservative Party lawmakers warned they would not tolerate a betrayal of Brexit.

“I was elected to represent my constituents and the Prime Minister’s team needs to be aware that backbench MPs won’t sit idly by and allow a so-called ‘soft Brexit’ with us being half-in, half-out,” Andrea Jenkyns wrote in The Daily Telegraph.

May’s personal authority was badly damaged after she called a snap election last year to strengthen her hand in Brexit talks but instead she lost her parliamentary majority, meaning she has to rely on a small Northern Irish party to govern.

While other senior ministers rallied round her after the resignations which left Westminster reeling on Monday, rumblings of discontent among rank and file lawmakers remained.

The Sun, Britain’s biggest-selling newspaper, said there had been “blunder after blunder” by May.

“Now there is chaos,” the paper said in its editorial. “Brussels must not mistakenly conclude, as EU Council chief Donald Tusk hinted, that one more push will destroy Brexit. Brexit must and will happen.”

The major issues for Britons were concerns about immigration, sovereignty and the sums paid to the EU.

The government has battled to find a way of tackling these while maintaining access to EU markets and avoiding burdensome customs arrangements that could damage businesses, with some leading companies warning they could cut investment or withdraw from Britain in the wake of a no-deal Brexit.

“But I come back to this point, if people don’t like this proposal what is their alternative? The challenge is all very well for people to say I wouldn’t do this. But remember, what are the options in front of us?”