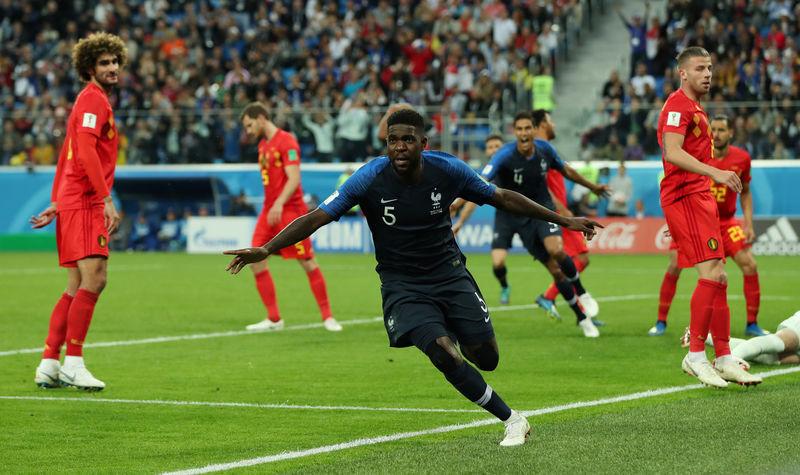 ST PETERSBURG (Reuters) – Samuel Umtiti’s 51st-minute header sent an impressive France into the World Cup final with a 1-0 win over Belgium in an absorbing first semi-final on Tuesday.

Didier Deschamps’ side will face England or Croatia in Moscow on Sunday as the French look to lift the trophy for the second time following their triumph on home soil in 1998.

In an enthralling, albeit highly tactical rather than incident-packed match, it was once again a set-piece that proved decisive with Umtiti’s near-post header from an Antoine Griezmann corner settling matters.

Having gained the lead, France showed the defensive nous to nullify the threat from Belgium’s Eden Hazard and Kevin de Bruyne, closing out the game for a win that sent them to their second straight major tournament final, following their loss to Portugal in Euro 2016.

It had been suggested that France needed to step up a level in quality if they were to get past the Belgians and they did just that.

But the worrying factor for whoever wins Wednesday’s game in Moscow is that France still look to have another gear to move into.

Deschamps, coach at Euro 2016 and captain of the 1998 World Cup winners, suggested as much.

“We showed character and mentality, it was very hard for us tonight. We worked hard defensively, we needed to take advantage a bit more in the counter-attacks but congratulations to my players and my staff,” he said.

Belgium manager Roberto Martinez was left frustrated by his team missing out to a set-piece goal, a familiar outcome in this tournament.

“Unfortunately for us the difference was a dead-ball situation. The game was very close, very tight and it was going to be decided by a little bit of luck in front of goal,” he said.

Belgium took early control of midfield with France content to sit deep and eliminate the threat of counter-attacks Hazard and De Bruyne.

But it was by no means a purely negative approach as the French offered their own danger on the break, perfectly illustrated when Paul Pogba’s delivery sent Kylian Mbappe racing toward goal and Belgium were thankful their keeper Thibaut Courtois was alert to snuff out the danger.

The first real opening came in the 16th minute when De Bruyne hooked the ball into the path of Hazard whose shot was just wide of Huge Lloris’s far post.

Hazard was dangerous again moments later when he cut in from the left and unleashed a rasping drive which clipped off the back of Raphael Varane and just over the bar.

From a Belgium corner, Toby Alderweireld tested Lloris with a smart shot on the turn but as the half progressed France began to create more.

Olivier Giroud flashed a header just wide and Mbappe set up Benjamin Pavard whose low shot was kept out by the outstretched leg of Courtois.

It was a fascinating first half and all that was missing was a goal but one came soon after the break.

From Griezmann’s corner, Umtiti beat Marouane Fellaini at the near post and powered a header home to put France ahead.

Fellaini flashed a header just wide and Axel Witsel forced a good save out of Lloris as Belgium pushed forward for an equalizer and France hung on in six minutes of stoppage-time to reach their third World Cup final.