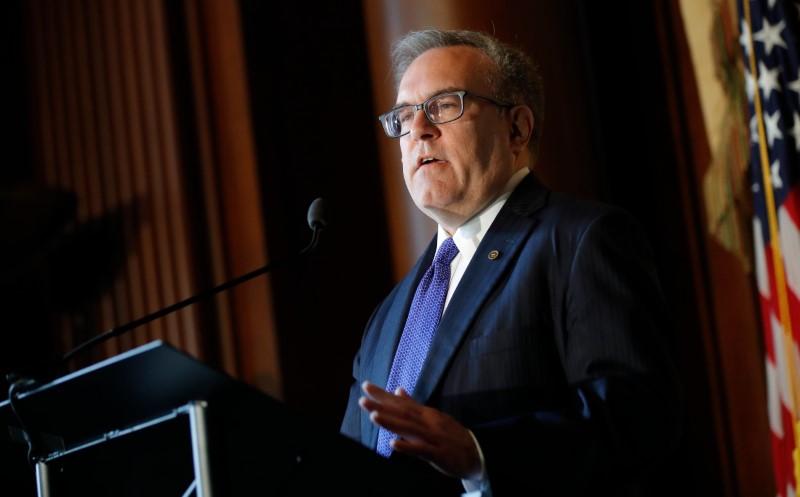 WASHINGTON (Reuters) – The U.S. Environmental Protection Agency’s acting chief said on Wednesday he would carry out the Trump administration’s push to cut regulations on industry, while also seeking to improve air and water quality, echoing the policies of former head Scott Pruitt who stepped down last week.

Andrew Wheeler, a longtime Washington insider, stepped in on Monday after Pruitt resigned in the face of pressure over a series of ethics controversies.

Unlike Pruitt, Wheeler been known to shun the spotlight. But some environmentalists say his experience means he can carry out Trump’s deregulation policy more effectively.

Wheeler, who worked at the EPA in the 1990s and later in the Senate, said in his first address to agency staff that he was “not at all ashamed” of more recent work he did lobbying for the coal company Murray Energy Corp.

The top issue Murray Energy asked him to work on was the Miners Protection Act to shore up pension and healthcare benefits for United Mine Worker retirees, said Wheeler, whose grandfather was a coal miner during the Great Depression.

Wheeler was an EPA staffer under President George H. W. Bush, then worked for Senator Jim Inhofe, an Oklahoma Republican and skeptic of mainstream climate science He more recently lobbied for energy interests including Murray Energy.

The company’s chief executive, Robert Murray, has pressured the Trump administration to ease regulations on mining.

The EPA will prioritize cleaning up industrial Superfund sites and financing investments in water infrastructure, Wheeler said, continuing Pruitt’s aim to bring the agency back to basics.

He did not mention Pruitt’s final move at the agency to undo pollution rules on retooled trucks known as “gliders,” which environmentalists say generate as much as 40 times the pollution of modern engines.

Wheeler, who had been confirmed by the Senate to serve as Pruitt’s deputy, will deal with many issues including replacing the Obama-era Clean Power Plan, the requirements of biofuels mixed into gasoline and diesel, and whether the EPA chief has a role in promoting U.S. fossil-fuel exports.

On Monday, the EPA sent a rule to reduce greenhouse emissions from power plants to the White House’s office of Management and Budget for review. It would replace the Obama-era Clean Power Plan and is expected to be more industry friendly. The EPA will open the rule to public comment after the OMB reviews it.