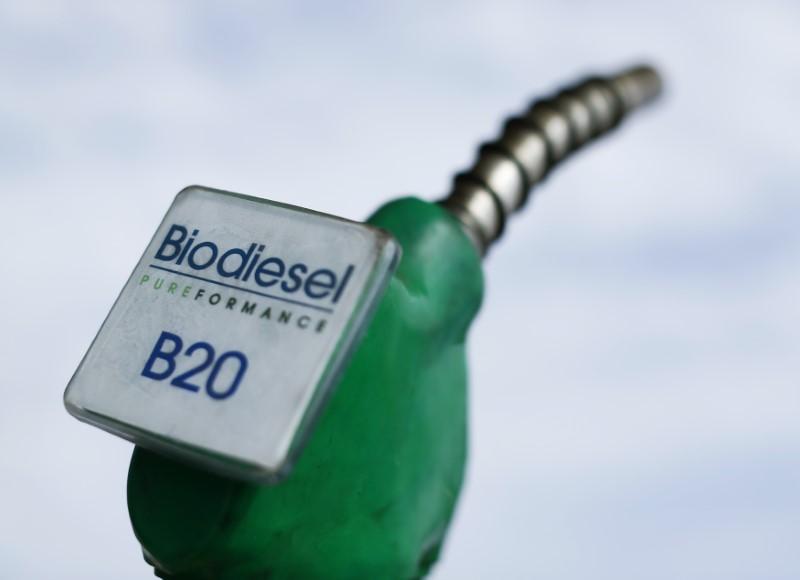 NEW YORK (Reuters) – The U.S. Environmental Protection Agency ditched a detailed plan that would have forced refiners to blend more biofuels into their gasoline and diesel in 2019 to compensate for volumes likely to be exempted under the agency’s small refinery hardship waiver program, according to newly released EPA documents.

A fuel nozzle from a bio diesel fuel pump is seen in this photo illustration taken at a filling station in San Diego, California January 8, 2015. REUTERS/Mike Blake

The plan would have boosted the renewable fuel blending obligation for the refining industry to 11.76 percent from 10.88 percent to offset volumes lost under the waiver program, which has been expanded sharply under President Donald Trump’s EPA, and keep overall blended volumes on target.

The idea was aimed at assuaging the powerful U.S. corn lobby which has accused Trump’s EPA of undermining demand for biofuels like corn-based ethanol through the waiver program, but was scrapped amid intense protest from the refining industry.

“What this shows is the EPA acknowledges it has the authority and the ability to reallocate the volumes lost under the small refinery exemption program,” Geoff Cooper, an executive at the Renewable Fuels Association, said on Wednesday.

The EPA said the documents reflect the agency’s process for administering the Renewable Fuel Standard (RFS), which is done in conjunction with the departments of Energy and Agriculture as well as the White House.

The move would have likely rallied compliance credit prices that have plunged to multi-year lows amid reports of the agency’s expansion of the waiver program.

Under the RFS, the EPA must set annual requirements for the volume of renewable fuels that oil refiners and other fuel companies must blend with their petroleum-based products. The 2005 policy has been a source of contention between powerful corn and oil lobbies in Washington.

The agency also has the power to exempt smaller refineries from the blending requirements if they can prove that complying with the regulation would cause them financial stress.

The EPA, under recently-resigned director Scott Pruitt, has roughly tripled the number of exemptions granted to small refiners, angering Midwest farmers and their legislative backers who say he effectively lowered the annual biofuels mandate.

Exemptions representing some 2.25 million gallons worth of biofuel were granted for 2017 and 2016, according to the EPA. That includes waivers covering 1.46 million compliance credits, called RINs, in 2017, the EPA said.

Under the scrapped plan, the EPA would have estimated the number of gallons of gasoline and diesel that would likely be exempted in 2019 under the small refinery waiver program and force the larger refineries to make up the difference.

The documents were published by the EPA as part of requirements aimed at providing the public more insight into federal decision making. Reuters and other news outlets reported on the EPA’s 2019 volumes proposal, but the documents provide new details about the agency’s approach.

The proposed changes came in a June 19th email from Tia Sutton of the EPA to the White House Office of Management and Budget. Pruitt, who resigned amid ethics scandals last week, had just returned from a Midwest tour where he met with farmers angry over his expansion of the exemption program.

A day later, some legal justification was added to the proposed rule, stating “this approach is consistent with the text of our regulations, which accounts for the amount of gasoline and amount of diesel projected to be produced by exempt small refineries in 2019.”

Refiners learned of the changes and made a full-court press to the agency and White House to reverse it.

Refinery-state senators Ted Cruz of Texas and Pat Toomey of Pennsylvania, both Republicans, had calls with Pruitt a day after reports of the changes circulated, according to Pruitt’s public schedule.

On June 22, the EPA struck the changes in a new email to the OMB office, the documents showed.

The final proposed rule was published on June 26.