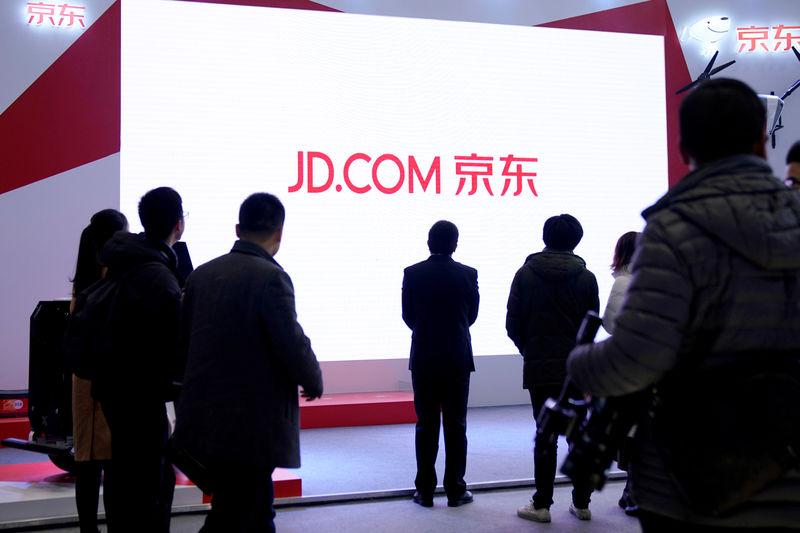 The fundraising underscores investor enthusiasm for big, privately-held Chinese technology companies even as public valuations falter. This week, smartphone maker Xiaomi completed the world’s largest tech IPO in almost four years, but saw its shares fall on debut in Hong Kong even after pricing its deal at the low end of its offered range.

JD Finance’s fundraising round, which kicked off late last year, establishes its valuation at 120 billion yuan, the sources told Reuters.

The valuation is double the roughly 60 billion yuan JD Finance was estimated to be worth after it was split from JD.com, China’s second-largest e-commerce firm, in mid-2017.

A man riding an Ofo shared bicycle takes pictures of a JD.com delivery robot on a road in Beijing, China June 18, 2018. REUTERS/Stringer

More investors could yet join the fundraising, said one of the sources, meaning that JD Finance’s final valuation may rise further.

JD Finance’s fundraising follows that of Ant Financial, the affiliate of its arch rival Alibaba, which last month was valued at $150 billion when it raised $14 billion in the world’s largest-ever single fundraising by a private company.

The investments suggest investors remain keen to put money into online payments and lending services in China, especially those backed by large companies such as Alibaba and JD.com which already have stable user traffic. JD.com itself is backed by U.S. retail giant Walmart Inc and Chinese gaming behemoth Tencent.

Earlier this year another tech heavyweight, Baidu Inc, raised $1.9 billion from a consortium led by U.S. private equity firms TPG and Carlyle Group in the spin-off of its finance unit.

JD Finance, whose financial offerings include consumer credit and wealth management products, is expected to seek a domestic initial public offering at some point although there is no firm time table for a listing, according to the sources.

JD Finance said it currently doesn’t have an IPO plan.

The firm plans to use proceeds from the fundraising to invest in domestic financial institutions and buy securities and banking licenses, among other areas, sources with knowledge have previously told Reuters.

In mid-2017, JD.com spun off the unit, making it a fully Chinese-owned entity, a criterion needed to obtain licenses to manage certain financial products in China.

Under that deal, it sold 28.6 percent for 14.3 billion yuan ($2.3 billion) to undisclosed investors. JD.com receives 40 percent of the restructured entity’s pre-tax profit and has an option to convert that back to a 40 percent equity stake should the regulatory environment change.