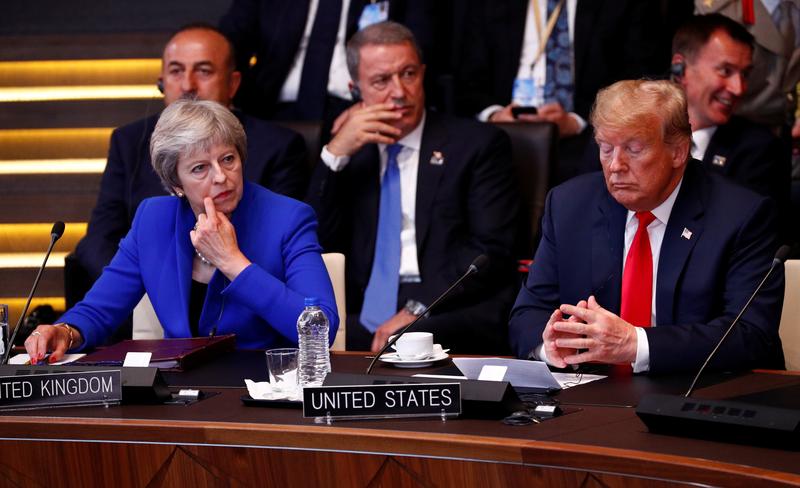 LONDON (Reuters) – U.S. President Donald Trump meets Prime Minister Theresa May this week, making a long-awaited first visit to Britain which will be closely watched to determine the health of the so-called “special relationship” between the two countries.

Much will rest on the personal dynamic between May, a staid, career politician who prides herself on careful decision-making, and Trump, the brash, often-bellicose, former reality TV star.

Here are some of the most notable moments in their relationship so far:

In January 2017, May became the first foreign leader to visit Trump after he took office. The abiding image of that visit was Trump taking May’s hand to help her down the steps of a White House colonnade.

May also secured a commitment from Trump to NATO, which was briefly seen as a diplomatic coup.

U.S. President Donald Trump and Britain’s Prime Minister Theresa May react as they pose for a family photo at the start of the NATO summit in Brussels, Belgium July 11, 2018. REUTERS/Kevin Lamarque

But any good vibrations from that moment soon dissipated when Trump, the same day, announced plans to ban migrants from seven Muslim-majority countries – a decision that drew fierce international criticism and appeared to blindside May.

Trump sparked outrage in Britain and earned a sharp rebuke from May last November when he re-posted anti-Islam videos from the far-right group Britain First.

As British politicians lined up to condemn him, Trump, in an unprecedented attack on one of America’s closest allies, replied with an unrepentant message.

Months later, Trump said he had not intended to cause offence in Britain.

Trump handed May a huge diplomatic boost in the aftermath of the nerve-agent poisoning of a Russian former double agent on English soil in March. As Britain pointed the finger at the Kremlin and expelled Russian diplomats, Trump rallied behind her and kicked out 60 Russian envoys from the United States in solidarity.

THE BOMBING IN SYRIA

Britain and the United States again showed their solidarity on defence and security in April, when May risked the wrath of a sceptical parliament by joining a U.S.-led bombing campaign against Syrian President Bashar al-Assad’s forces, after they agreed Assad was behind a chemical weapons attack on civilians in Douma.

May called Trump in March to express her “deep concern” about his plans to impose tariffs on steel and aluminium imports from the European Union and others.

Trump pushed ahead with the tariffs anyway, and, as the EU readied its response, May found herself calling for restraint on both sides, fearing a tit-for-tat escalation that would expose Britain’s reliance on free trade as it leaves the EU.

At a G7 summit in Canada last month British officials were delighted that attendees had “pulled it out of the bag” by convincing Trump to sign up to a joint communique at the end of the summit. May praised the agreement as proof that the group could talk through their differences and get things done.

Trump then walked back on the agreement hours after he had left.

Aides did not break the news to May until her plane had taken off. Her reaction? “Surprisingly muted, given the circumstances.”