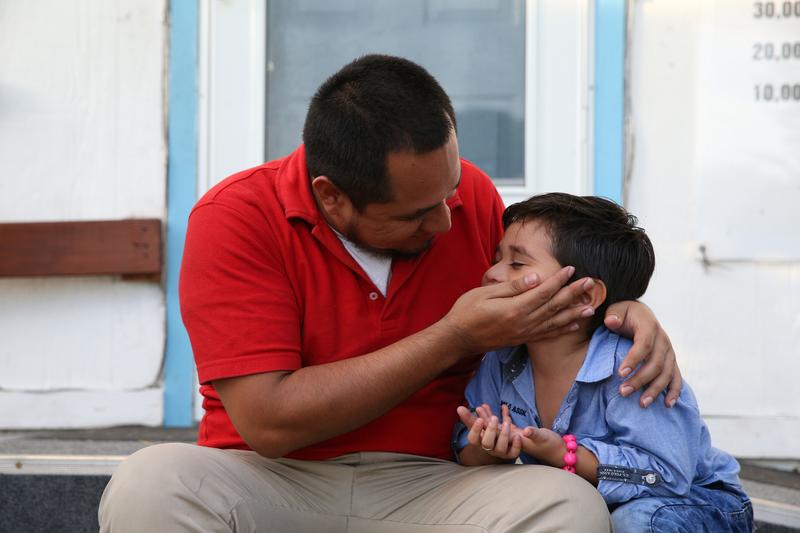 “(I went) without knowing where he was – if he was eating, how they were treating him,” said Jimenez, 29, as he shared a meal with his child for the first time since May. “Imagine the joy I felt.”

The father said that he and his son were overcome with emotion when they set eyes on each other. The boy cried, he said. Asked if he was happy to see his dad, Jeremy shyly smiled and nodded.

Jimenez, who was held in two different facilities in Texas, said he did not learn he would rejoin Jeremy until four hours before and did not believe it until he saw the boy.

Jeremy was among 63 children under the age of five whom Judge Dana Sabraw in U.S. District Court in San Diego ordered the U.S. government to reunite with their parents by Tuesday. They were separated by immigration officials when they crossed into the United States from Mexico.

On Tuesday, Sabraw told government attorneys he would not extend that deadlines set two weeks ago for the children under five or for 2,000 other children to be reunited by July 26.

The government had asked Sabraw to extend the deadlines because it needed time to test DNA to confirm family relationships, run background checks, find parents who were released from custody and review parental fitness.

“We’ve saved kids’ lives by keeping them from being with some really evil people some of them,” Health and Human Services Secretary Alex Azar told CNN, adding that 38 children were to be reunited on Tuesday.

U.S. President Donald Trump, who took his hardline policy on immigration to the White House from the 2016 election campaign, was dismissive of reporters’ questions about the missed deadline.

“Tell people not to come to our country illegally,” he said. “That’s the solution.”

Walter Armando Jimenez Melendez, an asylum seeker from El Salvador, arrives with his four year-old son Jeremy at La Posada Providencia shelter in San Benito, Texas, U.S., shortly after he said they were reunited following separation since late May while in detention July 10, 2018. REUTERS/Loren Elliott

Not all of those separated from their children, however, had crossed the border illegally. Some, like Jimenez, walked up to a border crossing point and asked for asylum.

More than 2,300 children were separated from their parents after the Trump’s administration announced its “zero tolerance” policy in early May. The government is seeking to prosecute all adults who crossed the border illegally. While parents are held in jail to await trial by a judge, children are moved into various centers across the country.

After U.S. immigration officials brought Jimenez and his son together on Tuesday afternoon, the pair went to La Posada Providencia, an emergency shelter for refugees in San Benito, Texas near the Mexican border.

Over a dinner of rice, bread, meat, ice cream and cookies at the shelter, one of the center’s nuns said a prayer of thanks for the reunion of the boy and his father. Jeremy, dressed in a denim jacket, smiled broadly at hearing his name mentioned.

The two left San Salvador on May 12 after Jimenez was extorted by a gang member at his home and later accused by police of being a gangster, the father said.

They gave themselves up at the Texas border on May 24 and they remained together for five days, Jimenez said. The two were separated on May 29 when border patrol agents said Jimenez had to attend a court hearing. Jimenez waited for two hours until they told him he would not be reunited with his child.

“They separated us with lies,” Jeremy said in Spanish. “More than mad, I was sad because I couldn’t say bye. I couldn’t give him a few words and tell him that everything would be all right.”

The father and son will move on by bus to Rock Hill, South Carolina, on Wednesday morning where they will be reunited with Jimenez’s wife and his stepson, the father said.

“Sometimes I try to be strong so as to not show him sadness,” said Jimenez, wearing a red polo and sporting short black hair and a light beard.

“I hope that from here on everything is pure joy for him and that he can quickly forget about all of this.”