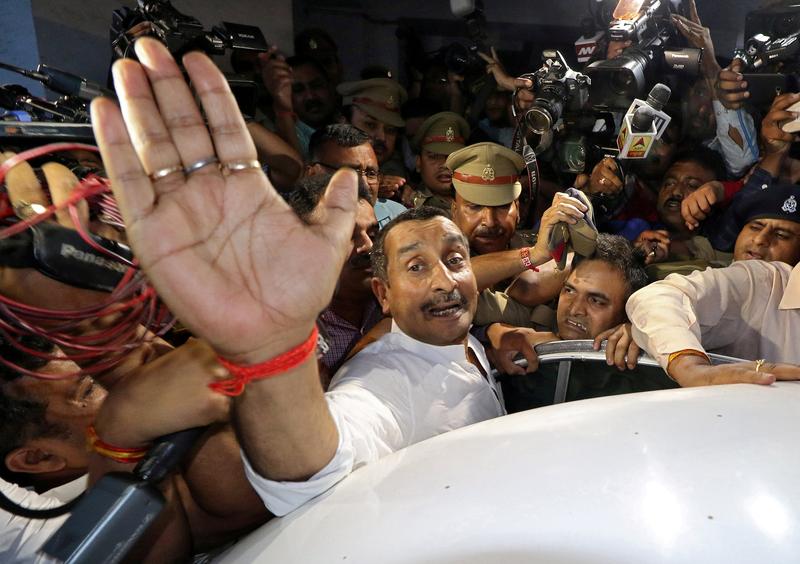 NEW DELHI (Reuters) – A lawmaker from India’s ruling party was charged on Wednesday in connection with the rape of a teenage girl, a case that has embarrassed Prime Minister Narendra Modi’s government amid a spate of sexual violence that has stirred street protests.

FILE PHOTO: Kuldeep Singh Sengar, a legislator of Uttar Pradesh state from India’s ruling Bharatiya Janata Party (BJP), reacts as he leaves a court after he was arrested on Friday in connection with the rape of a teenager, in Lucknow, India, April 14, 2018. REUTERS/Pawan Kumar/File Photo

Over 100 rapes are reported in India every day but the lawmaker’s case has strong political overtones with critics accusing Modi’s Bharatiya Janata Party in Uttar Pradesh state of hindering judicial action against the veteran legislator.

Kuldeep Singh Sengar was arrested in April in connection with the rape of the teenager in the city of Unnao, in Uttar Pradesh, India’s most populous state, a year after the alleged attack.

With opposition groups joining protests and vigils in cities across India calling for tougher action, Uttar Pradesh authorities handed over the investigation to the federal Central Bureau of Investigation (CBI) police.

In a statement, the CBI said it had filed charges based on its inquiry into a complaint submitted by the teenager’s mother alleging that her daughter, a minor, was taken to the lawmaker’s residence by a local woman and raped there.

Sengar’s lawyer, R.K Singh, said in April his client was innocent and the case was a conspiracy to harm his political career.

The brutal rape in 2012 of a 23-year-old medical student, who died of her injuries, sparked nationwide outrage and forced changes in the law. But six years later, there are few signs that sexual violence against women is abating.

In January, an 8-year-old Muslim girl from a nomadic community that roams the forests in Kashmir, was drugged, held captive in a Hindu temple and sexually assaulted for a week before being strangled and battered to death with a stone. Eight men are accused of being involved in the crime.

Her case caused a wave of revulsion around the country but also exposed communal divisions after two former ministers of the ruling party joined a rally in support of the eight accused, saying they were innocent.