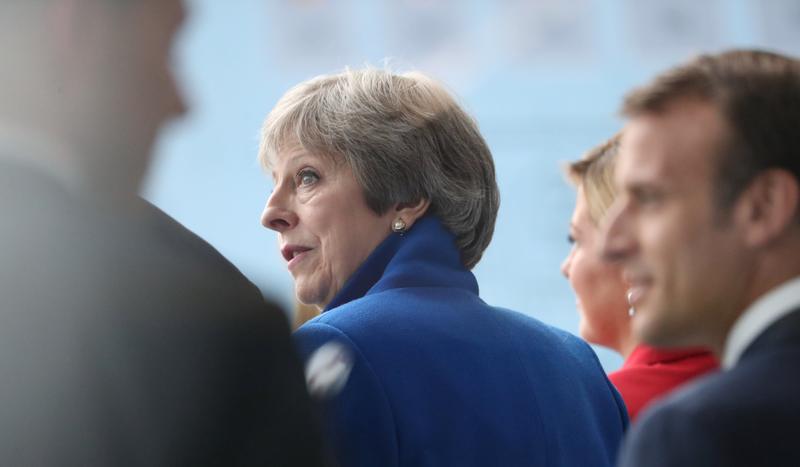 LONDON (Reuters) – British Prime Minister Theresa May will set out a blueprint on Thursday for what her government calls “a principled and practical Brexit”, putting at its core a plan for a free trade area for goods that has angered many in her party.

May is pressing on with her Brexit plan, shrugging off the resignations of two senior ministers and the anger of eurosceptic lawmakers in her Conservative Party who have accused her of betraying her pledge of a clean break with the EU.

Her government will publish a so-called white paper policy document on the future relationship, just over two years after Britons voted in a referendum to leave the European Union.

It will offer more detail on a position to try to move on with Brexit talks that have all but stalled. Britain is due to leave the EU next March, marking the biggest foreign and trading policy shift in almost half a century.

It will set out measures to ensure frictionless trade to protect “jobs and livelihoods”, and a desire for an “unrivalled security partnership”, but will underline that it allows Britain to take “back control of our borders, laws and money”.

The question is whether the EU will accept what some officials in Brussels see simply as an opening bid.

“Leaving the European Union involves challenge and opportunity. We need to rise to the challenge and grasp the opportunities,” Brexit minister Dominic Raab, appointed on Monday after the resignation of David Davis, is expected to say in the foreword of the document.

“This is the right approach — for both the UK and for the EU. The White Paper sets out in detail how it would work,” he is expected to say, according to his Brexit department.

Her plans, which also argue for Britain to set its own trade tariffs and open up services markets, are an attempt to meet the demands of businesses, pro-EU voters, Brexit supporters and the EU, which has warned repeatedly that time is running out.

With less than nine months to go, it is a long-delayed decision and has not been without its consequences — Davis and Foreign Secretary Boris Johnson resigned within hours of each other over a plan they said they could not defend.

Johnson, who was the face of Brexit for many in Britain, said May was heading for a semi-Brexit.

Raab, May’s new Brexit minister, will suggest that such criticism was not justified. He will describe the white paper as “a vision that respects the result of the referendum, and delivers a principled and practical Brexit.”