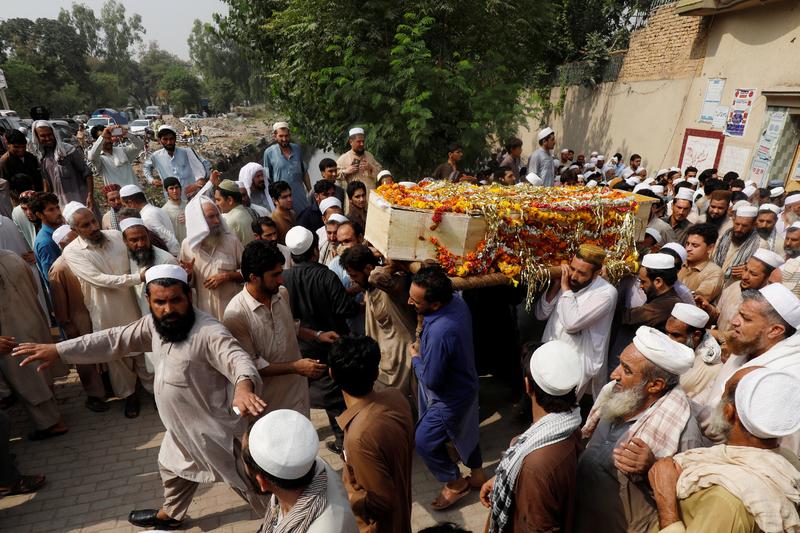 PESHAWAR, Pakistan (Reuters) – A suicide bomber blew himself up at a rally by an anti-Taliban political party in Pakistan, killing 20 people, including a candidate in July 25 elections, police and hospital officials said on Wednesday.

Men and relatives carry a coffin of a victim, who was killed with others in TuesdayÕs suicide attack during an election campaign meeting in Peshawar, Pakistan July 11, 2018. REUTERS/Fayaz Aziz

Awami National Party (ANP) candidate Haroon Bilour was killed in the late Tuesday blast in the northwestern city of Peshawar. His father, senior ANP leader Bashir Bilour, was killed in a suicide bombing in late 2012, in the run-up to Pakistan’s last election.

The Pakistani Taliban claimed responsibility for the Tuesday attack.

Men and relatives carry a coffin of a victim, who was killed with others in TuesdayÕs suicide attack during an election campaign meeting in Peshawar, Pakistan July 11, 2018. REUTERS/Fayaz Aziz

‎”The death toll from last night’s suicide attack has reached 20 while we have 65 injured, some of them in critical condition,” Zulfiqar Ali Babakhel, a spokesman for Peshawar’s main Lady Reading Hospital, told Reuters.

The ANP is a predominantly secular, ethnic Pashtun nationalist party, which has long competed with Islamist parties for votes in Pakistan’s volatile Pashtun lands, along the border with Afghanistan.

Islamist militants have attacked the party numerous times over the years, including in the run-up to the last election, in 2013

The Pakistani Taliban, a loosely aligned umbrella group of several militant and sectarian bands, have been waging a war against the Pakistani state for over a decade, condemned the party in its claim of responsibility.

“The anti-Islamism of the ANP is not hidden from anyone, and this secular party martyred many members of the Muslim community during its previous government,” militant spokesman Mohammad Khurasani said in a statement.

Haroon Bilour had hoped to win a provincial assembly seat in July.

Overall, violence in Pakistan has decreased in recent years after several military offensives against militant strongholds in the northwest.

But many militants have escaped into neighboring Afghanistan, from where Islamabad says they launch attacks back into Pakistan.

Last month, a U.S. drone strike killed Pakistani Taliban chief Mullah Fazlullah in eastern Afghanistan. Fazlullah had claimed responsibility for most of the attacks against the ANP before the 2013 election on the grounds that it had supported an army offensive against the militants.

The military announced on Tuesday it would deploy more than 371,000 troops to ensure peaceful and fair and free elections on July 25.