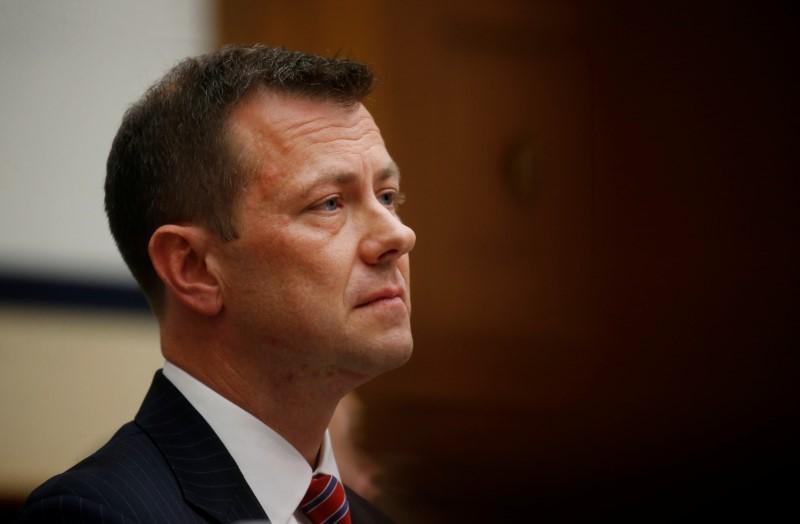 WASHINGTON (Reuters) – An FBI agent who criticized then-presidential candidate Donald Trump in text messages during the 2016 election campaign vigorously defended himself at a raucous hearing on Thursday, describing Republican lawmakers’ attacks on him as helping America’s enemies.

Republican and Democratic lawmakers shouted and swapped insults in the U.S. House of Representatives hearing as agent Peter Strzok said his personal political views had never affected his official work.

In the hearing, Republicans attacked the FBI, as President Trump himself has done, at a time when Special Counsel Robert Mueller is investigating Russian meddling in the election and possible collusion between Trump campaign aides and Russia.

The U.S. president has described Mueller’s investigation into possible collusion between Trump campaign aides and Russia as a political witch hunt.

Strzok worked on the Russia investigation, which the FBI started and was taken over by Mueller, appointed by a top Justice Department official following Trump’s dismissal in May 2017 of FBI Director James Comey.

Strzok was reassigned from that investigation. He also once worked on an FBI investigation into Trump’s campaign opponent, Democratic presidential nominee Hillary Clinton, on her handling of classified information while she was Secretary of State.

He and former FBI lawyer Lisa Page were having an extramarital affair during the campaign and exchanged thousands of politically charged texts. Some criticized Trump and some criticized Clinton.

In one text, Page asked Strzok if Trump was going to be president. Strzok replied: “No, he’s not. We’ll stop it.”

Strzok said on Thursday that the “we” in the text referred to the American people because he believed Trump would not win the election after criticizing families whose relatives have been killed while serving in the U.S. military.

He also said in the hearing, convened by two Republican-controlled House of Representatives committees:

“Today’s hearing is just another victory notch in Putin’s belt and another milestone in our enemies’ campaign to tear America apart.”

He said he had “expressed personal political opinions during an extraordinary presidential election” and that at times his “criticism was blunt,” but that it was not limited to Trump.

“Let me be clear, unequivocally and under oath: not once in my 26 years of defending my nation did my personal opinions impact any official action I took,” Strzok told the committees.

Lawmakers frequently interrupted Strzok and one another with shouts and insults.

“Okay, Kremlin, another good day for you,” Democratic Representative Luis Gutierrez said of the hearing when it was his turn to question Strzok. “Congratulations Kremlin, and congratulations to everyone who is helping them.”

Strzok declined to answer a question from Republican Representative Trey Gowdy, head of the House Oversight and Government Reform Committee, about interviews he conducted during the FBI’s Russia probe, saying the agency had directed him not to discuss ongoing investigations.

Republican Representative Bob Goodlatte, who heads the House Judiciary Committee, threatened to hold Strzok in contempt at the end of the hearing if he did not answer Gowdy’s question.

The seldom-enforced charge of contempt of Congress can be brought against someone for obstructing investigations. It is potentially punishable by imprisonment and a fine but requires several procedural steps.