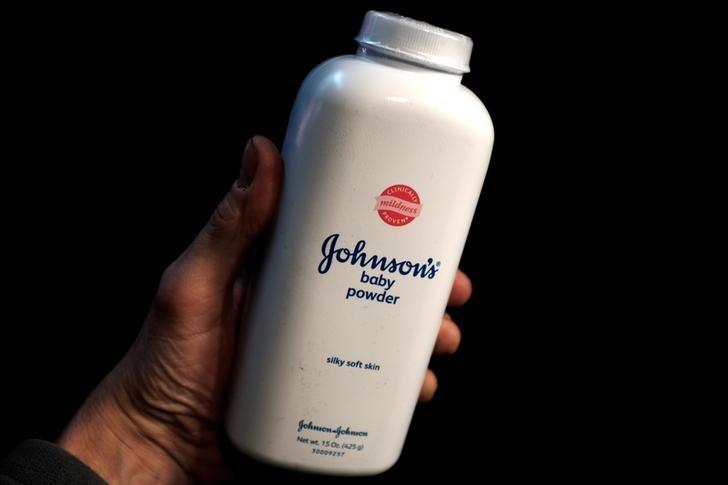 (Reuters) – A Missouri jury on Thursday ordered Johnson & Johnson (JNJ.N) to pay a record $4.69 billion to 22 women who alleged the company’s talc-based products, including its baby powder, contain asbestos and caused them to develop ovarian cancer.

FILE PHOTO: A bottle of Johnson and Johnson Baby Powder is seen in a photo illustration taken in New York, February 24, 2016. REUTERS/Mike Segar/Illustration

The verdict is the largest J&J has faced to date over allegations that its talc-based products cause cancer. J&J is battling some 9,000 talc cases.

Thursday’s massive verdict, handed down in the Circuit Court of the City of St. Louis, was comprised of $550 million in compensatory damages and $4.14 billion in punitive damages, according to an online broadcast of the trial by Courtroom View Network.

The jury’s decision followed more than five weeks of testimony by nearly a dozen experts on both sides.

The women and their families said decades-long use of Baby Powder and other cosmetic talc products caused their diseases. They allege the company knew its talc was contaminated with asbestos since at least the 1970s but failed to warn consumers about the risks.

J&J denies both that its talc products cause cancer and that they ever contained asbestos. It says decades of studies show its talc to be safe.

“Johnson & Johnson is deeply disappointed in the verdict, which was the product of a fundamentally unfair process,” the company said in a statement. The company said it remained confident that its products do not contain asbestos or cause cancer.

“Every verdict against Johnson & Johnson in this court that has gone through the appeals process has been reversed and the multiple errors present in this trial were worse than those in the prior trials which have been reversed,” J&J added, saying that it would pursue all available appellate remedies.

Mark Lanier, the lawyer for the women, in a statement following the verdict called on J&J to pull its talc products from the market “before causing further anguish, harm, and death from a terrible disease.”

“If J&J insists on continuing to sell talc, they should mark it with a serious warning,” Lanier said.

The majority of the lawsuits that J&J faces involve claims that talc itself caused ovarian cancer, but a smaller number of cases allege that contaminated talc caused mesothelioma, a tissue cancer closely linked to asbestos exposure.

The cases that went to trial in St. Louis effectively combine those claims by alleging asbsestos-contaminated talc caused ovarian cancer.

Previous talc trials have produced verdicts as large as $417 million. But that 2017 verdict by a California jury, as well as other verdicts in Missouri, was overturned on appeal, and challenges to at least another five verdicts are pending.

The U.S. Food and Drug Administration commissioned a study of various talc samples from 2009 to 2010, including of J&J’s Baby Powder. No asbestos was found in any of the talc samples, the agency said bit.ly/2L5oXJP.

But Lanier during the trial told jurors that the agency and other laboratories and J&J have used flawed testing methods that did not allow for the proper detection of asbestos fibers.

Talc, the world’s softest rock, is a mineral closely linked to asbestos and the two substances can appear in close proximity in the earth.

Plaintiffs claim the two can become intermingled in the mining process, making it impossible to remove the carcinogenic substance. J&J denies those allegations, saying rigorous testing and purification processes ensure its talc is clean.