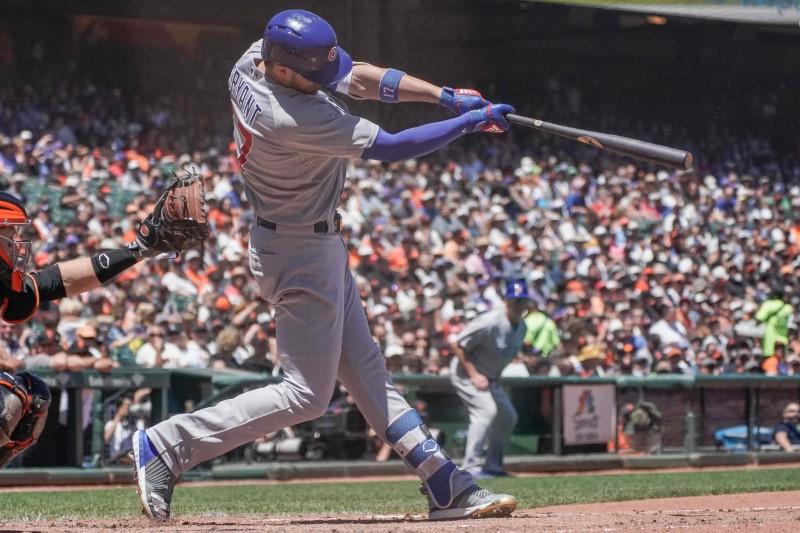 Bryant last played June 22 and was on the 10-day disabled list with shoulder discomfort. He was in the lineup batting third and playing third base for the matinee at AT&T Park.

Bryant took batting practice and ground balls in the field last week at Wrigley Field before being sent out on a rehab assignment, going 2-for-6 with a home run and three RBIs in two rehab games for Double-A Tennessee.

The Rangers acquired the veteran outfielder on Sunday as part of a deal that also brought right-handed pitchers Jason Bahr and Cory Gearrin from the San Francisco Giants. Texas received the three players for cash considerations or a player to be named later.

Jackson, 31, had started 36 games and appeared in 59 games for San Francisco this season. He was batting .242 with 13 RBIs. By designating Jackson for assignment, Texas has seven days to trade, release or send him outright to the minor leagues.

—The Houston Astros optioned right-hander Ken Giles to Triple-A Fresno a day after he suffered a ninth-inning meltdown and appeared to mutter an expletive in the direction of manager A.J. Hinch as he was removed from the game.

Left-hander Cionel Perez was recalled from Double-A Corpus Christi to take Giles’ spot on the roster.

After Giles gave up singles to the first three Oakland Athletics batters he faced with the Astros up 4-0, Hinch replaced him with Hector Rondon, who has handled the majority of the save opportunities since Giles was demoted from the closer role. As Giles walked off the mound, cameras appeared to catch him uttering an expletive in the direction of Hinch. Rondon went on to blow the save, and the Astros wound up winning 6-5 in the 11th inning.

Scott, 28, was on the Red Sox’s roster briefly this season. He appeared in one game June 19 at Minnesota, giving up two runs in one-third of an inning. He has been dominant at Pawtucket, however, posting a 1.15 ERA and striking out 48 in 30 appearances in relief.

Kennedy, 1-8 with a 5.13 ERA, was sidelined in June with an oblique strain but said the latest injury, while on the same side, is in a different spot. Tuesday was his first start since that injury.

The Twins recalled right-hander Alan Busenitz from Triple-A Rochester to replace Reed. This will be his third time on the Minnesota roster this season. He has appeared in six games for the Twins and has a 2-0 record with a 6.43 ERA.

— The Chicago White Sox have purchased the contract of right-hander Jeanmar Gomez from Triple-A Charlotte and designated struggling pitcher Bruce Rondon for assignment.

The 30-year-old Gomez signed as a free agent with the White Sox on Jan. 30 after eight major league seasons. With Charlotte, he posted a 5-0 record with a 2.03 ERA in 30 relief appearances.

—The Los Angeles Dodgers announced that they have claimed left-hander Zac Rosscup off waivers from the Colorado Rockies.

Rosscup has appeared in 71 major league games over his career but hasn’t pitched in the big leagues yet this season. He started the year on the 60-day disabled list with a blister on his left middle finger. Rosscup, 30, made 10 relief appearances with Colorado’s Triple-A Albuquerque affiliate and gave up one earned run in 8 1/3 innings.

In a corresponding move, the Dodgers designated left-hander Edward Paredes for assignment. In 15 relief appearances this season, Paredes, 31, has a 2-0 record and a 5.87 ERA.