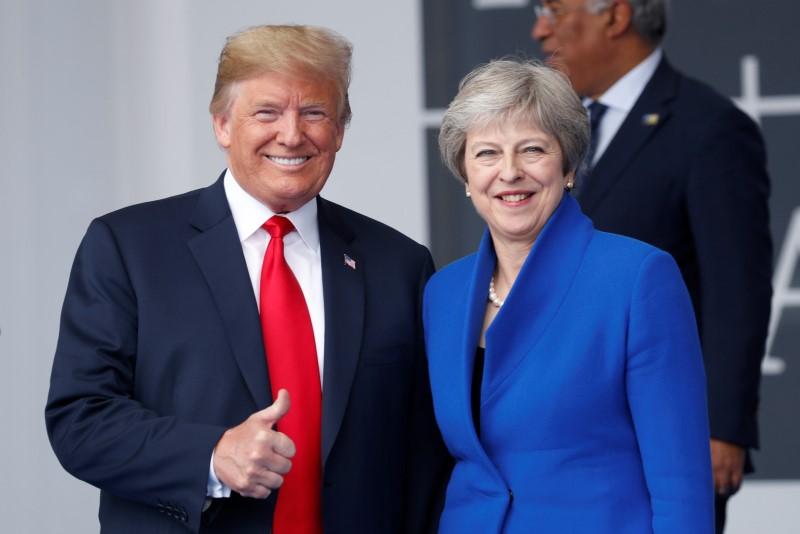 LONDON (Reuters) – U.S. President Donald Trump arrived in “hot spot” Britain on Thursday after casting doubt on Prime Minister Theresa May’s plans for leaving the European Union and with protests planned across the country where he says the people like him a lot.

After a NATO summit where he provoked a crisis session to force allies to raise their defence spending, Trump landed in Britain for his first visit as president having described the closest U.S. ally in Europe as being in turmoil over Brexit.

May hopes Trump, who landed at Stansted airport before flying by helicopter to the U.S. ambassador’s London residence, will help to accelerate a future free trade deal, though his public comments on Brexit cast a shadow over the visit.

“I’m going to a pretty hot spot right now, right? With a lot of resignations,” Trump told a news conference at the NATO summit in Brussels.

Trump’s trip coincides with a tumultuous week for May after two senior ministers resigned in protest at her plans for trade with the EU after Britain leaves next March.

May’s “business-friendly” Brexit proposal was agreed by her cabinet only last Friday after two years of wrangling since Britons voted to leave the bloc in a 2016 referendum, though some supporters of Brexit cast it as a betrayal.

“The people voted to break it up, so I imagine that’s what they’ll do. But maybe they’re taking a little bit of a different route, so I don’t know if that’s what they voted for,” said Trump.

Asked about Trump’s comments at a hastily-arranged meeting with journalists, May said she was delivering wishes of the British people.

Trump, who has repeatedly praised Brexit, has expressed enthusiasm for a wide-ranging trade deal with Britain after its EU departure in March next year.

Supporters of Brexit say such a trade deal with the world’s biggest economy would be one of the great benefits of exiting the bloc.

Trump’s victory in the 2016 presidential election shocked British diplomats in Washington and relations between May, a vicar’s daughter, and Trump have been strained at times.

Just hours after May’s foreign minister, Boris Johnson, resigned and complained that the Brexit dream was being suffocated, Trump said he might speak to him during the trip.

May is trying to unify her deeply divided Conservative Party behind her Brexit plans with some of her own lawmakers openly speaking of a leadership challenge.

While she hopes the Trump visit will focus on trade and strengthening security ties, it is likely to be heavy on rhetoric about the transatlantic “special relationship” and short on specifics such as any details of a post-Brexit trade deal.

Many Britons are opposed to Trump’s trip which is not the full state visit he was originally promised with the pomp and ceremony that entails. A YouGov poll on Wednesday showed 77 percent had an unfavourable opinion of the president and just 50 percent thought his visit should go ahead.

Nick Hurd, Britain’s Policing Minister, told parliament police expected more than 100 protests across the country, including two large demonstrations in London on Friday, and there were robust and proportionate plans in place.

A high fence has been erected around the U.S. ambassador’s central London residence where Trump will spend Thursday night and the embassy has sent out an alert warning Americans in London to keep a low profile in case protests turn violent.

More than 60,000 people have signed up to demonstrate in London on Friday when protesters intend to fly a large balloon over parliament portraying Trump as an orange, snarling baby.

A campaign is also underway to get “American Idiot”, a 2004 song by the U.S. punk rock band Green Day, to the top of the UK Singles Chart.

On Thursday, Trump will travel to Blenheim Palace, the 18th-century stately home where Britain’s World War Two leader Winston Churchill was born and spent most of his childhood.

May will host a black-tie dinner for Trump there, attended by senior ministers and about 100 business leaders, including from Blackstone group, Blackrock, Diageo, McLaren and Arup.

The two leaders will hold talks the following day at Chequers, the 16th-century manor house which is the prime minister’s official country residence. These will focus on relations with Russia, trade, Brexit and the Middle East.

Later, Trump will go to Windsor Castle for tea with 92-year-old Queen Elizabeth. When he leaves Britain on Sunday, after a trip to Scotland where he owns two golf courses, he heads to Helsinki for a summit with Russian President Vladimir Putin.

U.S. President Donald Trump gives a thumbs up while he and Britain’s Prime Minister Theresa May take part in a family photo at the start of the NATO summit in Brussels, Belgium July 11, 2018. REUTERS/Kevin Lamarque