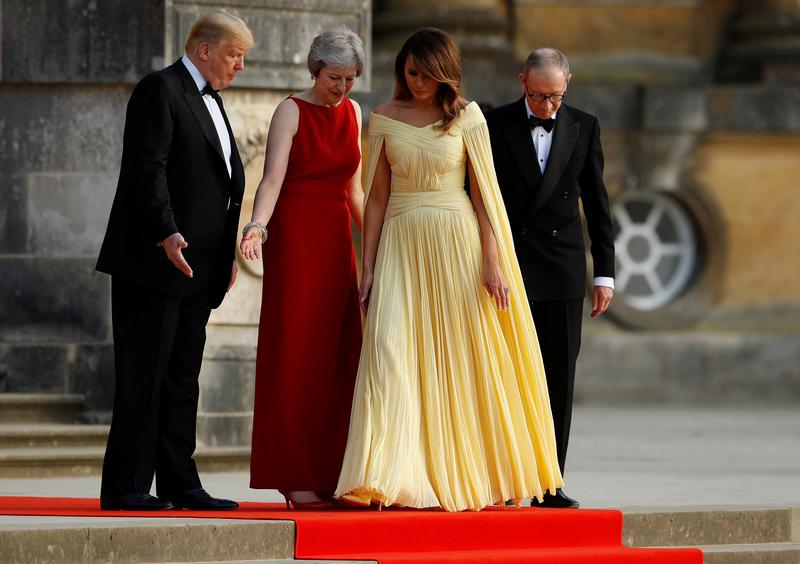 BLENHEIM PALACE, England (Reuters) – U.S. President Donald Trump said a free trade deal with Britain might be impossible if it went ahead with Prime Minister Theresa May’s proposals for post-Brexit ties with the European Union, in a damaging intervention set to further criticism of her plans.

In an interview with Britain’s Sun newspaper published late on Thursday, Trump said May’s plans for a business-friendly Brexit would leave it too close to the EU to allow a new trans-Atlantic trade deal to be struck.

Just hours earlier at a lavish dinner to mark Trump’s first visit to Britain as president, May made a direct pitch for a deal with Washington. She praised the friendship between the two allies, glossing over Trump’s previous remarks that Britain was a “hot spot” in turmoil over Brexit.

Trump’s intervention comes at the end of a tumultuous few days for May. Two senior ministers resigned in protest this week at her plans for trade with the EU after Britain leaves the bloc next March.

May’s “business-friendly” Brexit plan – which would keep Britain in a free trade zone for goods with the EU but mean it has to share some EU rules – was agreed by her cabinet only last Friday after two years of wrangling since Britons voted to leave the bloc in a 2016 referendum.

A trade deal with the United States is one of the main aims of Brexit supporters within May’s Conservative Party, who are concerned that she is making too many concessions to the EU.

Some Brexit supporters have cast May’s Brexit plan as a betrayal, including lawmakers in her own deeply-divided party who have warned of a leadership challenge.

Before the Sun interview was published, May invoked Winston Churchill as she addressed Trump and business leaders at a black-tie dinner at Blenheim Palace, the grand 18th-century country house which was the British World War Two leader’s birthplace.

British Prime Minister Theresa May and her husband Philip stand together with U.S. President Donald Trump and First Lady Melania Trump at the entrance to Blenheim Palace, where they are attending a dinner with specially invited guests and business leaders, near Oxford, Britain, July 12, 2018. REUTERS/Peter Nicholls

“Mr President, Sir Winston Churchill once said that ‘to have the United States at our side was, to me, the greatest joy’,” May told Trump, according to a text of her speech provided by her office.

“The spirit of friendship and co-operation between our countries, our leaders and our people, that most special of relationships, has a long and proud history. Now, for the benefit of all our people, let us work together to build a more prosperous future,” she said.

Outside the mansion, near Oxford to the northwest of London, a couple of thousand demonstrators lined the road and booed Trump’s arrival, one of over 100 protests police expect to take place during his four-day trip.

Whilst Trump’s trip is not the full state visit he was originally promised, he was heralded by military bands on his arrival in the country and at Blenheim, and on Friday he will have tea with Queen Elizabeth.

Trump had already cast doubt on May’s Brexit plans earlier in the day after a NATO summit in Brussels, where he provoked a crisis session to force allies to raise their defense spending.

The Sun said its interview with Trump was conducted in Brussels before he left for the British leg of his trip.