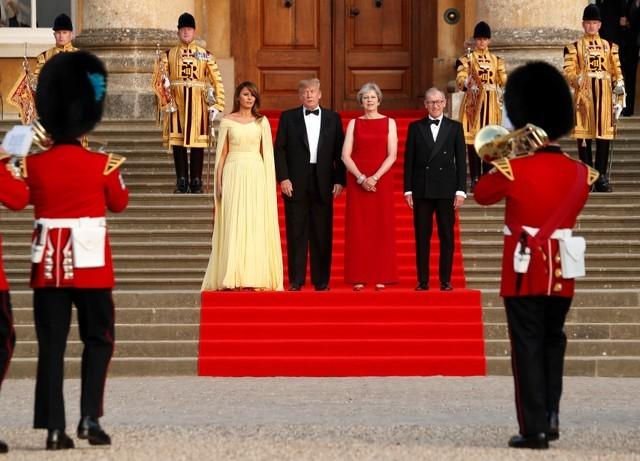 LONDON (Reuters) – U.S. President Donald Trump warned that British Prime Minister Theresa May’s proposals for leaving the European Union will have a negative effect on trade with the United States, according to an interview published on Thursday.

British Prime Minister Theresa May and her husband Philip stand together with U.S. President Donald Trump and First Lady Melania Trump at the entrance to Blenheim Palace, where they are attending a dinner with specially invited guests and business leaders, near Oxford, Britain, July 12, 2018. REUTERS/Kevin Lamarque

May’s Brexit plans “will definitely affect trade with the United States, unfortunately in a negative way,” Trump was quoted as saying in an interview with Britain’s Sun newspaper.

The comments by Trump, on his first visit to Britain as president, come at the end of a tumultuous week for May after two senior ministers resigned in protest at her plans for trade with the EU after Britain leaves the bloc next March.

Trump was quoted as saying that former foreign secretary Boris Johnson, one of the ministers who quit, would make a great prime minister.

“I am not pitting one against the other,” Trump said in the interview. “I am just saying I think he would be a great Prime Minister…. I think he’s got what it takes.”

Trump described May as “a nice person”, according to the Sun, and renewed his criticism of London mayor Sadiq Khan, who he said was doing a “terrible” job running Britain’s capital.