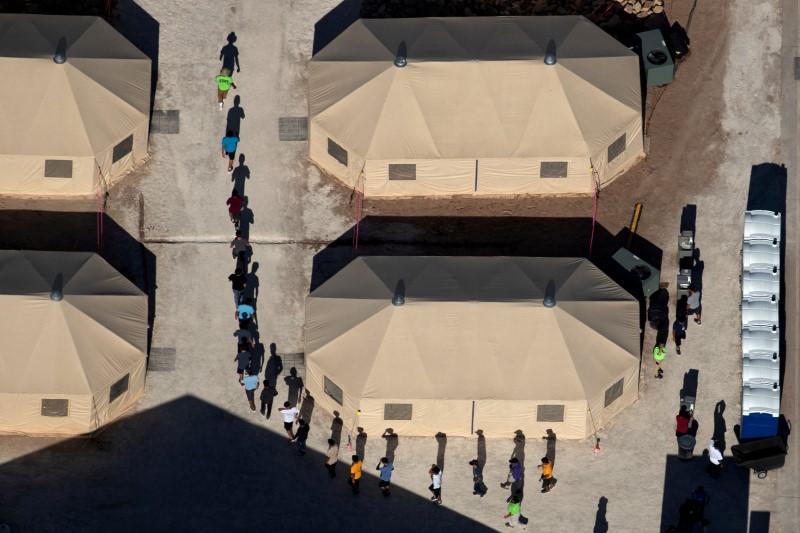 (Reuters) – The U.S. government must convince a judge on Thursday that it has complied with a court order for reuniting the youngest migrant children who were separated from their parents by U.S. officials after they crossed the U.S.-Mexico border.

FILE PHOTO: Immigrant children are led by staff in single file between tents at a detention facility next to the Mexican border in Tornillo, Texas, U.S., June 18, 2018. Picture taken June 18, 2018. REUTERS/Mike Blake/File Photo

The government has until 3 p.m. PDT (2200 GMT) on Thursday to explain to U.S. Judge Dana Sabraw in San Diego how many children still must be reunited with their parents and to inform him if it met Tuesday’s deadline for reuniting children under five.

On Wednesday night, a government official said all children under five who were eligible for reunification would be with their parents by Thursday morning.

The American Civil Liberties Union (ACLU), which sued the government over its separation policies, questioned that assertion. “Their statement is vague at a minimum,” said attorney Lee Gelernt. “We know they missed the deadline.”

Sabraw has asked the ACLU to propose penalties in the event he finds the deadline was missed.

The judge in June ordered the government to reunite by Tuesday the youngest children separated from their parents and all children by July 26.

The two sides will return to court on Friday to map out steps for reuniting the remaining children, who comprise the bulk of those separated. Sabraw earlier this week called that effort “a significant undertaking.”

The government has said it is taking care to ensure children are safe by checking parents’ criminal history, testing DNA to prove family relationships and reviewing adults for their suitability as a caregiver.

The ACLU has said none of those steps would be necessary if the government had never separated the families in the first place.

The government adopted its family separation policy as part of a broader effort to discourage illegal immigration earlier this year. The Trump administration buckled to intense political pressure and abandoned the policy in June.

Not all the migrant families who were separated at the border entered the country illegally.