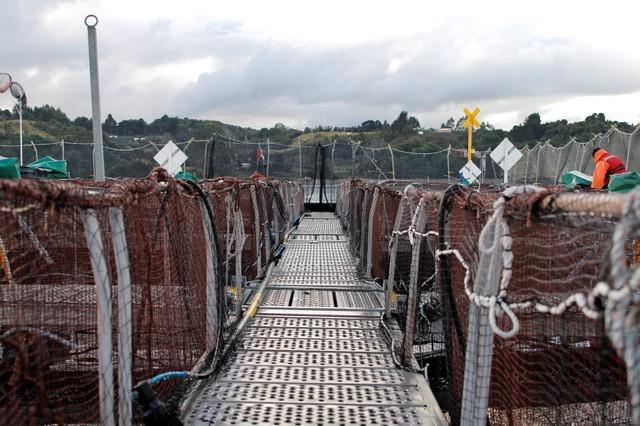 SANTIAGO (Reuters) – Chilean fishermen were working Thursday to recover hundreds of thousands of salmon that escaped from a fish farm as environmentalists warned of possible risks if they are eaten by humans, the government said.

A storm on July 6 damaged nine enclosures at Marine Harvest’s Punta Redonda Center near the southern city of Calbuco, freeing at least 600,000 salmon into the wild, the company said.

Local fishermen are working with Marine Harvest, one of the world’s largest salmon producers, to recover the salmon and had captured about 30,000 by Thursday, the firm added.

“We are monitoring all recapture efforts, ensuring that these fish are taken to a fishmeal plant because obviously they cannot be considered for direct (human) consumption,” Ruth Alarcon, deputy director of aquaculture at the government’s national fisheries service, told Reuters.

Under Chilean law, the company has 30 days to recover the fish. Within that period, it must recapture at least 10 percent or “environmental damage is assumed,” Alarcon said.

Some of the salmon had been injected with a course of antibiotics that was incomplete at the time of their escape, making them unfit for human consumption and prompting concern by environmental groups that the fish will make it into the food chain too early.

“It is a potential environmental disaster, of which consequences for the area are yet to be seen, but could be very serious,” Estefania Gonzalez, Greenpeace’s ocean coordinator in Chile, said in a statement sent to Reuters.

Marine Harvest downplayed the threat posed to the environment by Florfenicol, the antibiotic injected into some of escaped salmon, saying on Thursday that there was little risk it could generate resistance in humans.

Marine Harvest general manager Fernando Villarroel said the company was randomly testing samples from the reclaimed salmon at a laboratory.

“Up to now, 80 percent of the samples have shown no trace of antibiotics and the remaining 20 percent had levels 50 times lower than the limit set under Chilean sanitary regulations,” Villarroel said.

Chile’s national fisheries service authorized Marine Harvest to use a vessel with an echo sounder, making it easier to detect schools of fish.

Marine Harvest risks a fine of up to $220,000 or the revocation of its operating permit at its Punta Redonda Center, although the term is renewable for another 30 days.

The Chilean government has given the company 10 days to provide more information about how the escape occurred and a contingency plan for monitoring the drugs administered to the salmon.