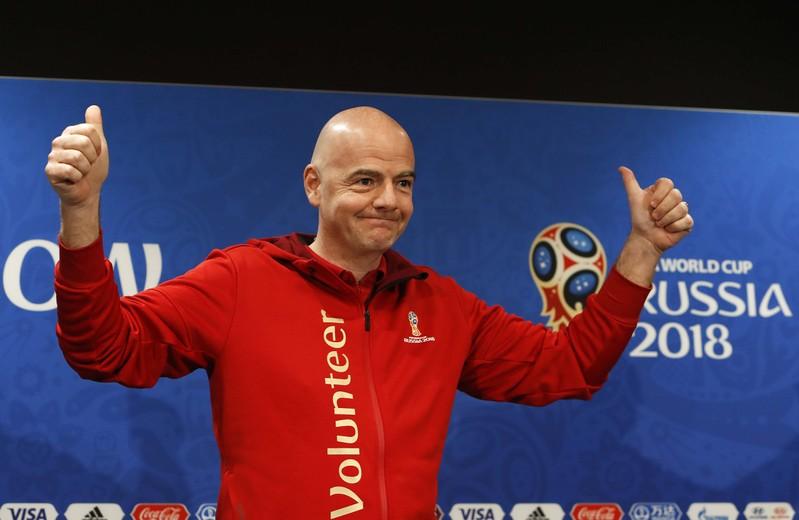 MOSCOW (Reuters) – FIFA president Gianni Infantino described the 2018 World Cup as the best-ever on Friday and said it had changed perceptions of the host nation Russia.

FIFA President Gianni Infantino greets the audience as he attends a news conference at the Luzhniki Stadium in Moscow, Russia July 13, 2018. REUTERS/Sergei Karpukhin

Infantino, dressed in a red volunteer’s uniform and in triumphant mood, hailed the success of video assistant referees (VARs) and predicted that goals scored from offside positions would be a thing of the past, at least in competitions where the new technology was used.

“For a couple of years, I was saying it would be the best World Cup ever, today I can say that with more conviction,” he said

Infantino promised that the tournament would leave a lasting legacy and there were “concrete plans” to make sure the stadiums were used in the future.

“This country, Russia, has changed. Russia has become a real football country… where football has become part of the country’s DNA and the culture,” he said.

“We had 98 percent occupancy of the stadiums, one million fans from abroad to discover this country, more than three billion viewers on television and there will certainly be one billion for the final.

“Everyone has discovered a beautiful country, a welcoming country, full of people who are keen to show to the world that what maybe is sometimes said is not what happens here.”

Infantino, who is paid an annual salary of 1.5 million Swiss francs ($1.49 million) according to FIFA, faced an awkward question when he was asked why the 17,000-odd volunteers were not paid.

“We are all, as well, volunteers,” he said. “Maybe not at the World Cup, because we have a job, but as soon as we go back home we drive our children to their football or basketball tournaments and we help selling drinks, preparing sausages, or helping in the restaurants.”

Infantino said that, despite initial fears, the VAR system had worked well, it had reviewed a of 19 decisions in the 62 matches so far and had corrected 16 decisions which were initially wrong.

“This is progress, this is better than the past,” he said. “VAR is not changing football, it is cleaning football.”

“It is difficult to think of the World Cup without VAR, it has been certainly a more just competition…The goal scored from an offside position is finished in football, at least in football with VAR,” Infantino added.

He said VAR’s deterrent effect had reduced the number of direct red cards for violent play from 16 in the 1998 tournament to none this time.

“Everyone knows that, whatever you do, someone will see it… one of the 30-odd cameras will spot it and you will be sent off,” the 48-year-old said.

Infantino did not give any new information on the whether the first 48-team tournament would be in Qatar in 2022 instead of in 2026 as originally planned.

“First we will discuss with the Qataris and then with the FIFA Council and stakeholders and decide calmly what the decision is,” he said. “For the moment, we have a World Cup with 32 teams.”