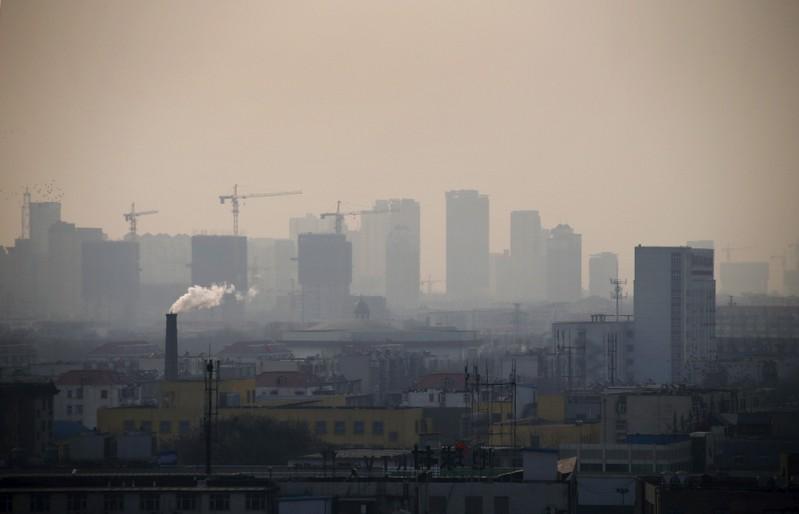 BEIJING/MANILA (Reuters) – For miners seeking to cater to the changing appetite of China, the world’s biggest iron ore importer, all eyes are on Tangshan, the country’s biggest steel-making city and the drastic measures it’s taking to rein in pollution.

FILE PHOTO: Smoke rises from a chimney among houses as new high-rise residential buildings are seen under construction on a hazy day in the city centre of Tangshan, Hebei province in this February 18, 2014 file photo. REUTERS/Petar Kujundzic/File Photo

It has just told mills in the city that production cuts, initially set at about 10-15 percent and in place from May to November, need to go further with some firms facing curbs of up to 50 percent during the summer.

Tangshan has also warned mills they could face closure if they don’t meet emission targets by October. The steps are at the forefront of a crackdown by Beijing, which this month flagged a widening of anti-smog targets to 82 cities from 28 now.

The impact on pricing for iron ore has been dramatic and miners are scrambling to revamp their strategies in response.

For lower grade ore, where the iron content is below 60 percent, discounts to higher grade material have widened significantly. In contrast, premiums for high-grade pellets, which can be shoveled straight into a steel furnace and do not go through a highly pollutive process called sintering, have surged.

“The era for China to buy cheap low-grade ore in order to be cost effective has passed. What China needs now and in the future will be more sophisticated ore, with higher iron and lower impurity content,” said Zhang Kun, a Beijing-based iron ore trader at Concord Fortune.

Its Pilbara Blend (PB) fines, the benchmark for fines, will have less alumina and will be less pollutive after part of the blend was removed and launched as a separate medium ore grade called RTX last week, they said.

“The main purpose of this move is to maintain the competitiveness of our mainstream product, PB fines, in the Chinese market after seeing smaller premiums in the past quarter,” said a company source, who was not authorized to speak to the media and did not want to be identified.

Rio Tinto declined to comment on its product line-up.

Of the big four iron ore miners, Brazil’s Vale stands to benefit the most from the market shift, particularly from the jump in Chinese demand for pellets – one of the few options for mills when output curbs kick in on heavy smog days.

“Our inventory for sintered ore is running low due to frequent production curbs. I am willing to pay whatever it costs to replenish and add stocks for pellets,” said a manager at a domestic steel mill in Tangshan, declining to be identified as he was not authorized to speak to media.

The benchmark price for 65 percent iron content pellets has shot up by a fifth over the past year, according to Metal Bulletin, while the premium on pellets over 62-percent fines surged to $56.84 a tonne on July 6, not far off a record $65.40 reached last October.

Vale produces nearly a third of the world’s pellets for export and has restarted some idled pelletising plants to account for a drop-off in output after a 2015 dam disaster closed its Samarco venture with BHP.

And it has a leg up on rivals with high-grade fines due to its massive S11D iron ore mine in Vale’s rich-grade Carajas resource complex that started shipping out ore last year.

China’s use of pellets is around 12-13 percent of its iron ore consumption, low compared to Europe where it is 33 percent, according to consultancy CRU International, adding that imports account for just 13 percent.

By contrast, of the other three, only Rio currently has a presence in pellets although that is not in Australia from which it ships most of its iron ore.

Instead the name of the game is improving the quality of fines, with BHP and Fortescue Metals Group Ltd recently announcing new mine investments.

Fortescue is under pressure due to the discount for lower grade ore. Prices for 58-percent ore, a similar level to Fortescue’s product, have been trading at a discount of about 40 percent to the 62-percent benchmark since the start of the year.

For graphic on price gap between medium-grade and low-grade iron ore click reut.rs/2J5DMHt

Profits for Fortescue, an iron ore specialist, have been hit hard, with earnings before interest, tax, depreciation and amortization (EBITDA) tumbling 31 percent on weak prices in the six months to end-December. By contrast, Rio’s iron ore EBITDA climbed 16 percent in the same period, while Vale’s rose 6 percent and BHP’s gained 3.5 percent.

Fortescue, whose China sales dropped to 89 percent of total sales in January-March from 95 percent in the previous financial year, is now looking to other markets to take on more of its lower grade ore.

“We are also continuing to develop markets across all the growth economies with customers in North and South East Asia and India,” said Binjun Zhuang, group manager for China business development at Fortescue.

Robust profits for Chinese mills have helped drive demand for higher grade ore, he said, but added that when profitability moderates, mills will refocus on input costs, increasing demand for products like Fortescue’s.

Reporting by Manolo Serapio Jr. in Manila and Muyu Xu in Beijing; Editing by Edwina Gibbs