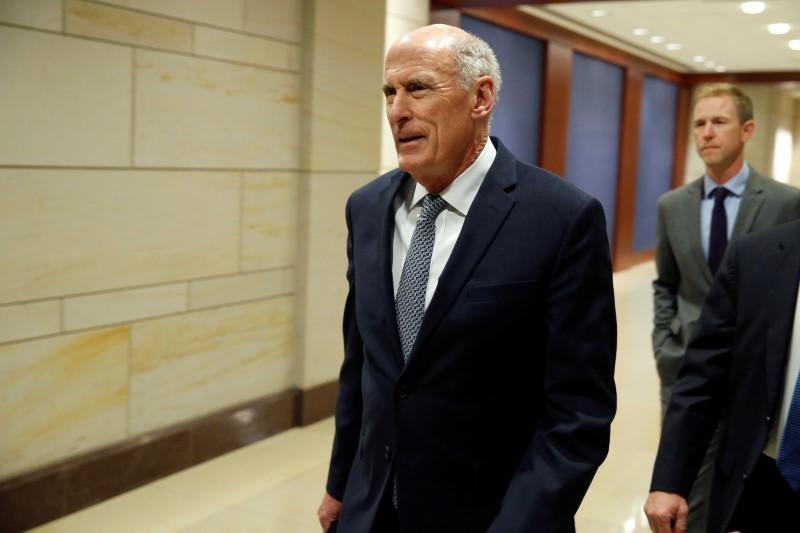 WASHINGTON (Reuters) – The U.S. intelligence chief warned on Friday that the threat was growing for a devastating cyber assault on critical U.S. infrastructure, saying the “warning lights are blinking red again” nearly two decades after the Sept. 11, 2001, attacks.

FILE PHOTO: Director of National Intelligence Dan Coats arrives for a closed-door briefing on Syria for the U.S. House of Representatives on Capitol Hill in Washington, U.S., April 17, 2018. REUTERS/Joshua Roberts

Of the four, “Russia has been the most aggressive foreign actor, no question,” he said.

Coats spoke at the Hudson Institute think tank shortly after the Department of Justice announced the indictment of 12 Russian military intelligence officers on charges of hacking into the computers of the 2016 U.S. presidential campaign of Hillary Clinton and Democratic Party organizations.

The summit will begin with one-on-one talks between the two leaders in which Trump has said he will raise the U.S. intelligence assessment that Russia used cyber attacks and other means to meddle in the 2016 election, a charge Moscow denies.

Coats warned that the possibility of a “crippling cyber attack on our critical infrastructure” by a foreign actor is growing.

He likened daily cyber attacks to the “alarming activities” that U.S. intelligence agencies detected before al Qaeda staged the most devastating extremist attack on the U.S. homeland on Sept. 11, 2001.

“The system was blinking red. Here we are nearly two decades later and I’m here to say the warning lights are blinking red again,” he said.

Coats said the U.S. government has not yet detected the kinds of cyber attacks and intrusions that officials say Russia launched against state election boards and voter data bases before the 2016 election.

“However, we fully realize that we are just one click away of the keyboard from a similar situation repeating itself,” Coats continued.

At the same time, he said, some of the same Russian actors who meddled in the 2016 campaign again are using fake social media accounts and other means to spread false information and propaganda to fuel political divisions in the United States, he said.

These individuals have been “creating new social media accounts, masquerading as Americans and then using these accounts to draw attention to divisive issues,” he said.

China, Coats said, is primarily intent on stealing military and industrial secrets and had “capabilities, resources that perhaps Russia doesn’t have.” But he said Moscow aims to undermine U.S. values and democratic institutions.