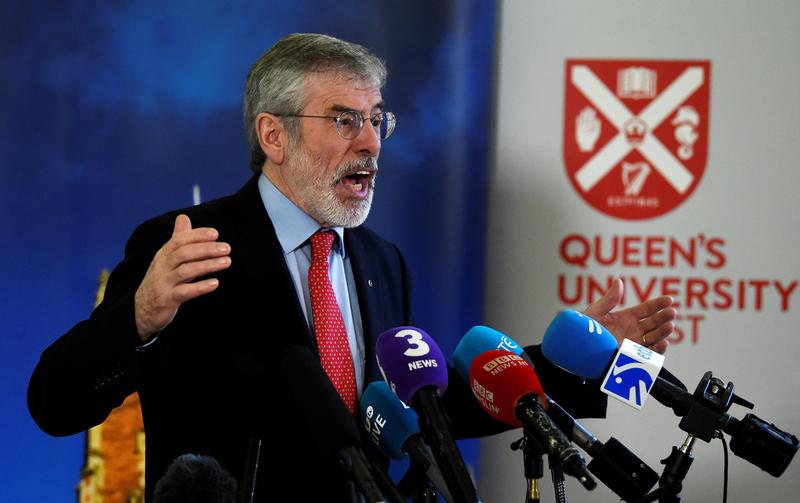 BELFAST (Reuters) – An explosive device was thrown at the home of former Sinn Fein leader Gerry Adams in Northern Ireland overnight, the Irish nationalist party said on Saturday, in an attack it blamed on “increasingly desperate and irrelevant groups.”

A second device was thrown at the home of the party’s former Northern Ireland chairman Bobby Storey, the party said in a statement.

Sinn Fein said one of the explosive devices caused damage to a car. Adams said in a Twitter post that no one was hurt in the attack on his house.

The Belfast attacks came after days of street violence in Northern Ireland’s second city Londonderry, which police blamed on militant Irish nationalists opposed to a 1998 peace deal that Adams helped to broker.

The peace deal largely ended three decades of violence in Northern Ireland between Irish nationalists who wanted the region to join the Republic of Ireland and pro-British unionists who wanted it to remain British. More than 3,000 died in the violence.

Several groups of dissident Irish nationalists remain active and carry out occasional attacks, but their capacity is tiny compared with the Irish Republican Army (IRA), which decommissioned its weapons after the 1998 deal.

Many of the dissidents consider Adams and his Sinn Fein party – the former political wing of the IRA – as having betrayed the Irish nationalist cause by signing a peace agreement with the British government.

Political leaders in Northern Ireland have warned that Britain’s decision to leave the European Union and the possibility of infrastructure on the border between Northern Ireland and the Irish republic for the first time since 1998 could help dissident groups to recruit new members.

Police on Friday blamed dissident group including the Real IRA for several nights of violence in Londonderry.

A spokeswoman on Saturday said police were attending incidents at two locations in West Belfast, but did not give any further details.

Reporting by Conor Humphries in Dublin and Ian Graham in Belfast; Editing by Mark Potter