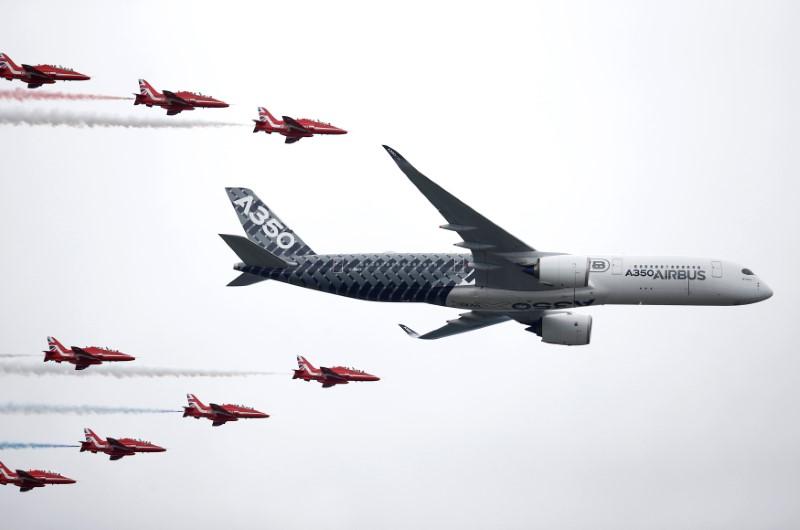 FARNBOROUGH, England (Reuters) – Aerospace firms are setting out wares from luxury jets to lethal drones at back-to-back British air shows this week, hoping trade tensions will not deter airlines from buying jetliners even as geopolitical uncertainty allows them to sell more weapons.

The quintessentially English atmosphere of the Royal International Air Tattoo, where straw-hatted VIPs watch fighters thunder over picturesque Cotswolds villages, gives way on Monday to the Farnborough Airshow, where the hard-nose business deals in the $800 billion aerospace and defense sector will be done.

Trade tensions between the United States and both China and Europe, disputes over the consequences of Britain’s exit from the European Union and an increase in global protectionist rhetoric have barely dented a prolonged industry boom.

“The overall environment will reflect industry health, despite the dark clouds of Brexit and other global trade setbacks in the background,” said analyst Richard Aboulafia of Teal Group.

“In short, we’ll see more of what we’ve seen for years: aviation remaining a strangely protected and happy corner of a turbulent world.”

The bullish outlook was underscored ahead of the show by forecasters Flightglobal Ascend.

The two giants will add to record orders for benchmark narrowbody jets, whose waiting lists underpin their near-record share prices, while seeking a recovery in sales of bigger jets.

After a lull, Boeing will be looking for a boost to its largest twinjet, the future 777X. Sources said recently it is in talks for an eye-catching deal with Saudi Arabia.Airbus will hope to end uncertainty over AirAsia’s support for its A330neo jet after a showdown on prices. That could also involve a deal for smaller planes, though doubts have been expressed over financial commitments to Airbus.

Farnborough is the first such event since Airbus and Boeing shook up the industry by agreeing to absorb key commercial programs of smaller rivals Canada’s Bombardier and Brazil’s Embraer as they prepare for future competition from China.

The result should be a fierce contest for sales in the 100-150-seat sector even before Boeing closes its Embraer deal.

A new airline, Moxy, is expected to confirm a large order for the rebranded Airbus A220, the former Bombardier CSeries.

The event is also expected to provide new evidence of strong demand for freight planes as e-commerce drives up shippers’ profits despite global trade tensions.

Analyst predictions for total commercial orders and commitments vary from last year’s 900 to about half that.

“We are not blind: there are things that need to remain on watch,” the head of major engine-maker CFM said on Saturday.

Farnborough will also be an opportunity for aerospace firms to plot next moves on civil and defense for decades to come.

The July 16-22 show is not only about order headlines but also about sending signals to investors, keeping competitors guessing and keeping potential buyers interested.

Boeing will want to maintain interest in a potential new mid-market plane, while giving itself until next year to decide whether to launch the new 220-270-seat jet.

While it is further ahead in pre-development than at the same stage on earlier programs, it must convince airlines it can be ready in 2025, the deadline for many fleet overhauls.

Airbus may talk up its possible new A321XLR, designed to address a shortfall in transatlantic performance of its longest-range single-aisle jet and targeted at U.S. majors.

The aircraft, with an improved take-off weight of 100 tonnes and 4,500 nautical miles range, has already had an unannounced commercial launch in a bid to head off Boeing’s proposed new jet from 2021, industry sources said.

U.S. sources doubt it will do everything Airbus claims.

Both planemakers are likely to deepen a push into high-margin services, announcing maintenance and operational deals in competition with airlines and parts providers. It’s part of a tug of war for profits between planemakers and their partners.

Suppliers will be trying to gauge how far the jetmakers are prepared to go in buying up parts of their supply chain. And many in Europe will be discussing how to prepare for a possible ‘hard Brexit’ or a disorderly UK exit form the European Union.

Sensitive UK choices over international partnerships are also expected to loom large in the defense side of the show.

The UK government will set out a combat air strategy with potential repercussions for defense suppliers around the world.

It could ignite efforts to develop a successor to the four-nation Eurofighter but is expected to leave open whether Britain would seek to enter a project already underway between France and Germany, or risk a repeat of costly procurement splits.

For now, Sweden is shaping up as the most likely partner and South Korea, Japan and Turkey or Gulf arms-buying countries like Saudi Arabia could be drawn in, arms analyst Francis Tusa said.

“It is a game of industrial poker,” he told Reuters.