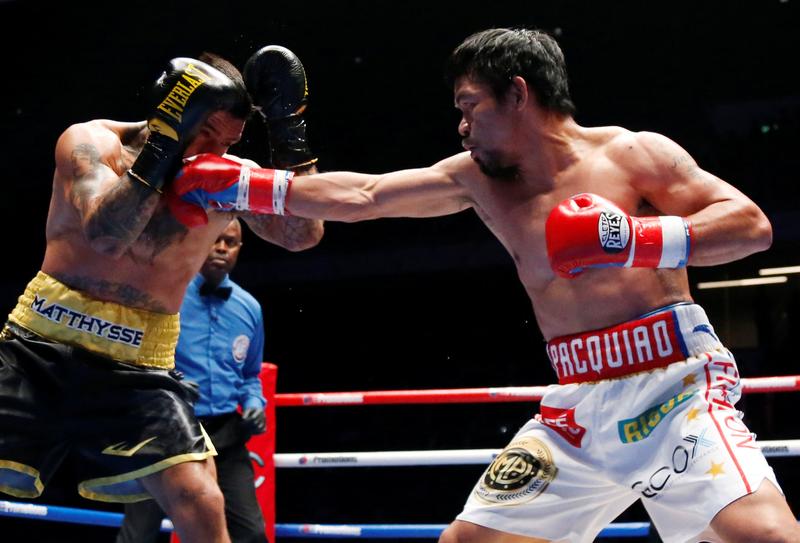 The 39-year-old Filipino legend looked focused and busy from the opening bell and had the 15,000 fans at the Axiata Arena on their feet when he sent his Argentine opponent to the canvas three times in total with an array of clubbing blows.

The southpaw dropped his opponent for the final time with a brutal uppercut and the win, his first inside the distance since 2009, improves the eight-division world champion’s record to 60-7-2.

“I’m surprised. Matthysse is a very tough opponent,” Pacquiao said in a post-fight interview following a performance in which he showed glimpses of the spectacular form that catapulted him to the top of global boxing over a decade ago.

“I knocked him down and that’s a bonus for being patient in the fight, and working hard in training.”

Pacquiao set the pace early, probing for openings and moving menacingly around the ring as he dropped Matthysse for a first time in the third round with an uppercut after a flurry of punches had forced the Argentine onto the defensive.

Unable to gain a foothold against Pacquiao’s swarming attacks, Matthysse (39-5-1) looked to land on the counter but was forced to take a knee towards the end of the fifth round when he was visibly shaken by a right hook to the temple.

Referee Kenny Bayless called off the fight after two minutes and 43 seconds of the seventh round when Matthysse buckled following another stiff uppercut and spat out his mouthguard as he was being counted.

The win, in his first bout since losing the WBO welterweight title to unheralded Australian Jeff Horn in Brisbane a year ago, gives Pacquiao his 11th world title in an incredible career that has made him a national hero in his native Philippines.