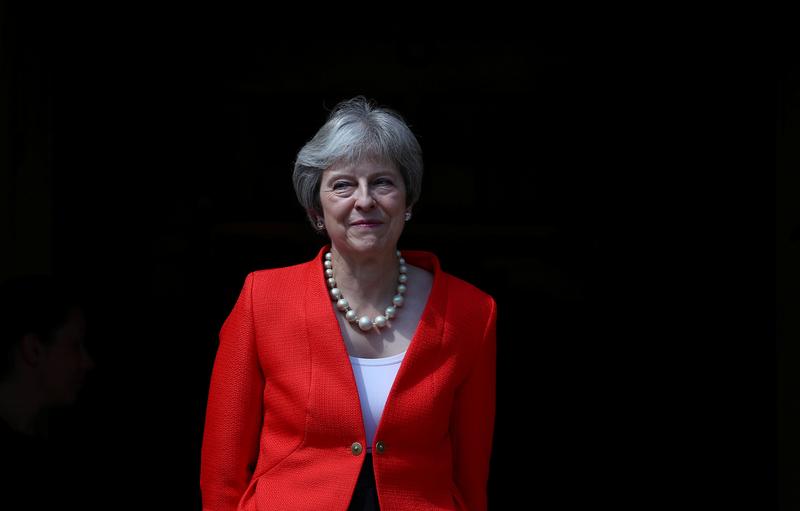 LONDON (Reuters) – British Prime Minister Theresa May won a series of votes in parliament on Monday, keeping her over-arching strategy to leave the European Union just about on track after bowing to pressure from Brexit supporters in her party.

But by accepting the demands of hardline Brexit campaigners, she exposed her vulnerability in parliament, where both wings of her Conservative Party attacked each other, highlighting the deep divisions that have so far hampered progress in talks with the EU.

May has vowed to stick to her plan to negotiate the closest possible trade ties with the EU, saying her strategy was the only one that could meet the government’s aims for Brexit, the biggest shift in Britain’s foreign and trade policy for decades.

But even before the EU has had time to assess her vision for Britain’s future ties with the bloc, her plans have come under fire from both camps in the Conservative Party. One pro-EU ex-minister called it the “worst of all worlds”, while eurosceptics said the strategy kept Britain too close to the bloc.

On Monday, Brexit supporters targeted the government’s so-called customs bill, hoping to toughen up her plans. But instead of facing them down and fuelling tensions, the government accepted their four amendments.

But by hardening the language to emphasise that the future collection of duties and taxes by Britain and the EU be on a reciprocal basis, some lawmakers feared that Brexit supporters may have made May’s plan less sellable to the bloc.

Parliament voted 318-285 to pass the bill. It will now go to the upper house of parliament before becoming law.

After a rowdy debate when Conservatives criticized members of their own party, junior Treasury minister Mel Stride told parliament: “We have had a full, robust and comprehensive debate today as is entirely appropriate for a bill of this importance, importance to our ability to continue after our departure from the EU as one of the world’s great trading nations.”

May denied a suggestion in parliament that her Brexit plan was dead, and her spokesman said the decision to accept those amendments were “consistent” with the white paper policy document ministers agreed earlier this month.

Where the government might struggle is explaining its acceptance of the demand that the EU must collect tariffs on Britain’s behalf, if London is to do the same – a suggestion one expert said the bloc’s negotiators were unlikely to accept.

The government won the vote on the tariffs amendment with a narrow majority of three lawmakers. Junior Defence Minister Guto Bebb resigned his position after deciding to vote against the government, the 10th Conservative to quit over May’s plan.

The government’s acceptance of the amendments did little to ease the tensions in May’s party, which is at war with itself over the Brexit plans.

In one of the rowdiest debates in parliament on Brexit so far, pro-EU Conservative lawmaker Anna Soubry said: “The only reason that the government has accepted these amendments is because it is frightened of somewhere in the region of 40 members of parliament, the hard no-deal Brexiteers, who should have been seen off a long time ago.”

The battle over the amendments is unlikely to be the last that May and her team will have to face, and may have spurred the government’s move to bring forward parliament’s mid-year summer break to Thursday rather than next week.

May had to fight hard to get the agreement of Cabinet ministers at her Chequers country residence earlier this month for her vision for Britain’s future ties with the EU. It was then undermined by the resignations of Brexit minister David Davis and Foreign Secretary Boris Johnson.

They and other eurosceptic Conservatives say the plan to keep close trade ties with the EU – which is only a starting point for a second phase of talks with Brussels – betrays her promise of a clean break with the 27-nation bloc after Brexit.

From the other wing of May’s party, pro-EU former Education Minister Justine Greening called on Monday for a second referendum, saying it was the only way to break the stalemate in parliament over the best future relationship with the bloc.

Greening branded May’s plan as “a fudge I can’t support. It’s the worst of both worlds”.

May’s spokesman said there would be no second referendum under any circumstances, and restated her position that the Chequers plan was the only way to deliver a Brexit that worked in the best interests of the country.

May said she was sticking with her plans.

“I wouldn’t have gone through all the work that I did to reach that agreement only to see it changed in some way through these bills,” she told parliament.