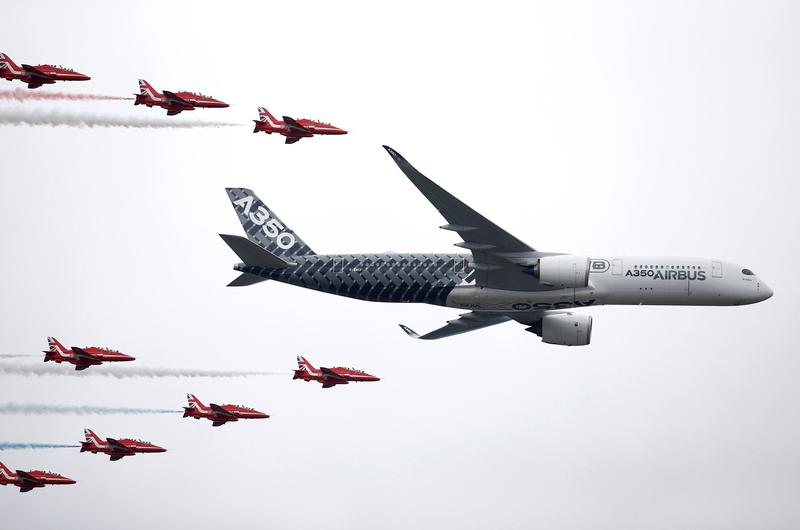 FARNBOROUGH, England (Reuters) – Aerospace firms Airbus (AIR.PA) and Boeing (BA.N) will kickstart a contest for tens of billions of dollars of orders at the Farnborough Airshow on Monday, ensuring fireworks start early as they seek to bolster their already bulging order books.

The two rivals are expected to make several announcements on day one of the July 16-22 event, starting even before the gates open to tens of thousands of delegates, industry sources said.

There may be an intense battle for sales in the 100-150-seat market where Airbus and Boeing have forged new alliances.

Despite warnings from some analysts that the pace of orders could slow after an eight-year boom, there were signs of brisk activity as negotiators thronged London hotels on Sunday and some haggled over last-minute air show deals, observers said.

However, bankers said they would be watching closely to see how many of the hundreds of orders anticipated this week were new and how many involved adjusting earlier business or switching models, something not always easy to spot at first.

Higher oil prices and interest rates are seen as a warning sign that the long-running aviation boom may be peaking.

The week is expected to confirm demand for narrowbody jets from airlines such as Mexico’s VivaAerobus, which is shopping for some 40 Airbuses, or lessors like Goshawk and Jackson Square, both seen interested in jets in the Boeing 737 MAX category. Major lessors Air Lease and Avolon are also in town.

But both Airbus and Boeing are under pressure to increase orders for some of their wide-body jets due to a recent slowdown in that part of the market. One exception is the Boeing 787, after a multi-year effort to end delays and cost overruns.

Airbus could secure an order for a new A350 customer in Taiwan and Boeing will be looking to reinvigorate 777X sales.

Demand for freighters could also feature.

The Farnborough Airshow is the industry’s biggest event this year. It alternates with the Paris Airshow and collectively they account for over a quarter of industry order intake each year.

May’s words, to be delivered at the air show southwest of London on Monday, come at a crunch time as pro-Brexit lawmakers in her party oppose her EU exit strategy.

Britain is also expected to make a major announcement on future combat air strategy, though Europe’s fragmented fighter industry is seen as far from ready to unify around one project.