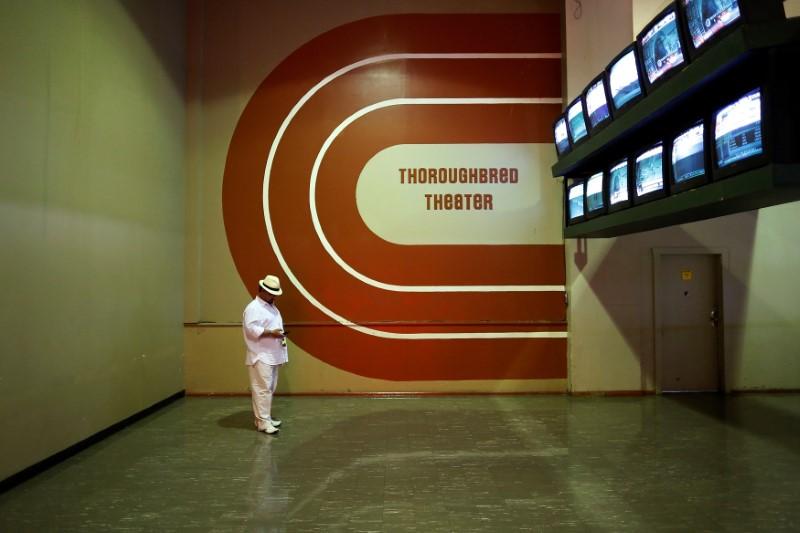 CLEVELAND (Reuters) – Long-struggling U.S. gambling industries hope to cash in on newly legal sports betting, but the growing wave of electronic and mobile gaming choices is considered more likely to change the face of those businesses rather than revive them.

FILE PHOTO – A race-goer checks his phone under a bank of televisions showing horse races for betters before the 138th running of the Preakness Stakes at Pimlico Race Course in Baltimore, Maryland, May 18, 2013. REUTERS/Jonathan Ernst/File Photo

State lawmakers and gaming company officials meeting over the weekend in Cleveland offered sober assessments when discussing how sports betting and other emerging games could boost states’ “sin taxes” and stimulate a sluggish gaming industry.

“Nobody’s going to be able to tell you there’s a silver bullet to fix racing, but I think there are a lot of things that could be tried,” Douglas Reed, senior associate at Spectrum Gaming Group, said about horse racing, one of the country’s most beleaguered wagering industries.

The sport has been in decline for several decades in the face of challenges that include expanded gambling options across the United States and an aging fan base.

“It’s going to require experimentation, reinventing the industry,” Reed said during a panel discussion at the National Council of Legislators from Gaming States summer meeting.

Sports betting is the most imminent of those experiments.

Six states have legalized gambling on sports and an additional 19 have proposed legislation to follow suit, with Ohio introducing the most recent bill on Thursday. The U.S. Supreme Court in May overturned a federal law barring sports betting in most places.

The rush to tap into the nation’s estimated $150 billion black market for gambling on athletics has led New Jersey and Delaware within the past six weeks to expand their so-called racinos, where casino-style games are offered at traditional horse-racing tracks.

But bringing the horse-racing business back to life will not

be as easy as increasing foot traffic to tracks. The rise of electronic games on race grounds has provided roughly $1 billion to horsemen annually, but has done little to enhance racing, according to the Jockey Club, a thoroughbred breeding and racing advocacy group.

“Unfortunately, those infusions of revenues haven’t necessarily increased the production or product of the racetrack,” said Christopher McErlean, vice president of racing for Penn National Gaming Inc, a casino operator and the largest racing company in North America.

As alternative gaming at tracks has grown, the number of races, thoroughbred breeding, field size and other measures of the industry’s success have fallen or flattened, McErlean said. U.S. racetrack wagering on horse races last year saw a more than 50 percent decline from 2003 peaks when adjusted for inflation.

Still, the shift toward non-race gaming at racetracks is likely to continue. Racetracks could be a place where players bet on the Kentucky Derby and an IndyCar race at the same time as viewing a battle of competitive video game playing known as e-sports. “Think about the potential crossover,” Reed said.

Slot machines, otherwise known as one-armed bandits, represent another shrinking hallmark of the nation’s gambling world, particularly in Las Vegas. They also stand a chance to draw from a potential surge of new customers entering casinos to bet on sports.

But as casinos construct sports betting operations inside their buildings, floor space for slot machines has been thrown into question.

“The consistent feedback we get is that innovation is on track regardless of the shrinking of any other forms of gaming,” said Will Green of the American Gaming Association, which represents casinos.

Lotteries, which have also struggled to expand beyond their baby-boomer fans in recent years, have secured some footing in sports betting as an operator, as opposed to racetracks and casinos, in a handful of states.

The aging state-run lottery businesses face their own challenges to modernize, with limited options for mobile devices, and operating under a host of government regulations.

“I’m of the opinion that it’s a dinosaur and we should let it go in the dirt,” Florida Republican state Representative David Santiago, a lottery opponent, told the crowd.