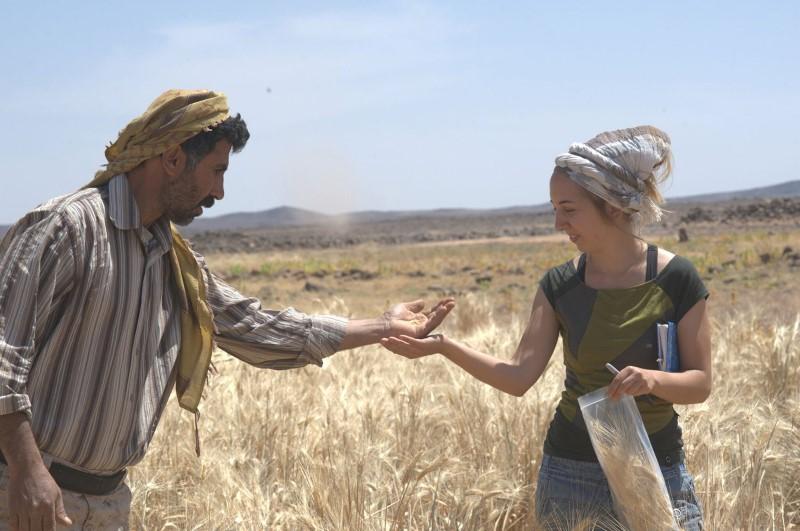 WASHINGTON (Reuters) – Charred remains of a flatbread baked about 14,500 years ago in a stone fireplace at a site in northeastern Jordan have given researchers a delectable surprise: people began making bread, a vital staple food, millennia before they developed agriculture.

Amaia Arranz-Otaegui, a University of Copenhagen postdoctoral researcher in archaeobotany, and Ali Shakaiteer, a local assistant to researchers working at an archeological site in the Black Desert in northeastern Jordan, are seen collecting wheat in this image provided July 16, 2018. Joe Roe/Handout via REUTERS

No matter how you slice it, the discovery detailed on Monday shows that hunter-gatherers in the Eastern Mediterranean achieved the cultural milestone of bread-making far earlier than previously known, more than 4,000 years before plant cultivation took root.

The flatbread, likely unleavened and somewhat resembling pita bread, was fashioned from wild cereals such as barley, einkorn or oats, as well as tubers from an aquatic papyrus relative, that had been ground into flour.

It was made by a culture called the Natufians, who had begun to embrace a sedentary rather than nomadic lifestyle, and was found at a Black Desert archeological site.

“The presence of bread at a site of this age is exceptional,” said Amaia Arranz-Otaegui, a University of Copenhagen postdoctoral researcher in archaeobotany and lead author of the research published in the journal Proceedings of the National Academy of Sciences.

A stone structure at an archeological site containing a fireplace, seen in the middle, where charred remains of 14,500-year-old bread was found in the Black Desert, in northeastern Jordan in this photo provided July 16, 2018. Alexis Pantos/Handout via REUTERS

Arranz-Otaegui said until now the origins of bread had been associated with early farming societies that cultivated cereals and legumes. The previous oldest evidence of bread came from a 9,100-year-old site in Turkey.

“We now have to assess whether there was a relationship between bread production and the origins of agriculture,” Arranz-Otaegui said. “It is possible that bread may have provided an incentive for people to take up plant cultivation and farming, if it became a desirable or much-sought-after food.”

University of Copenhagen archeologist and study co-author Tobias Richter pointed to the nutritional implications of adding bread to the diet. “Bread provides us with an important source of carbohydrates and nutrients, including B vitamins, iron and magnesium, as well as fiber,” Richter said.

Abundant evidence from the site indicated the Natufians had a meat- and plant-based diet. The round floor fireplaces, made from flat basalt stones and measuring about a yard (meter) in diameter, were located in the middle of huts.

Arranz-Otaegui said the researchers have begun the process of trying to reproduce the bread, and succeeded in making flour from the type of tubers used in the prehistoric recipe. But it might have been an acquired taste.

“The taste of the tubers,” Arranz-Otaegui said, “is quite gritty and salty. But it is a bit sweet as well.”