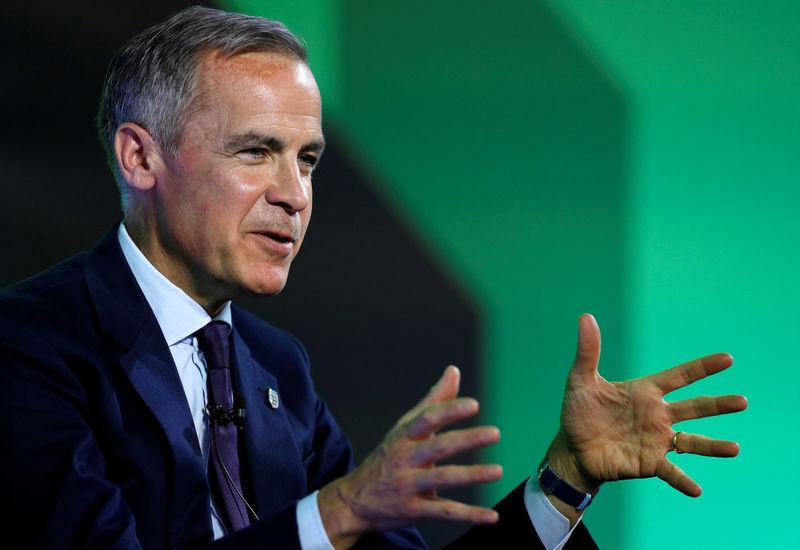 FARNBOROUGH, England (Reuters) – Bank of England Governor Mark Carney said on Tuesday that a no-deal Brexit would have “big” economic consequences, prompt a review of interest rates and leave many bankers idle.

Britain and the EU have negotiated a transition deal that would effectively keep Britain as non-voting member of the bloc from Brexit day next March until the end of 2020.

But it has not been ratified yet, meaning the UK could crash out and have to rely on WTO trading terms which, Carney said, would leave the country worse off.

“Our job is to make sure we are as prepared as possible,” Carney told MPs at a parliamentary hearing held at an air show in Farnborough, southern England.

Crashing out would prompt the Bank’s monetary policy committee to reassess the economic outlook and interest rates.

“It would be a material event. I wouldn’t prejudge in which direction, though,” Carney said.

“Speaking very narrowly about the financial services side, in the event of a no-deal scenario… there would be big economic consequences. We might have a lot of idle bankers as there is not a lot of demand for their services,” Carney said

Lenders, insurers and asset managers in Britain are playing safe and opening new EU hubs by March to maintain links with customers there irrespective of whether a transition deal of generous future trading terms are secured.

But they worry that without a transition deal, existing cross-border contracts such as derivatives and insurance policies would be disrupted, leaving consumers unable to make claims or companies not covered against adverse moves in currencies or borrowing costs.

Britain has said it will legislate to ensure “continuity” in contracts and that the EU must reciprocate, but the bloc says it was up to banks and not public authorities to get ready.

“Yes, we are concerned that the EU has not yet indicated its solution. The private sector cannot solve these issues,” Carney said.

“This is fundamentally about taking responsibility to protect the financial system… It’s cold comfort, but it will be worse in Europe than it is here.”

Britain last week published its proposals for a future trading agreement with the EU after Brexit, saying it wanted close ties in goods, but with financial services having less access to the bloc than now.

The financial sector attacked the government for not backing the industry’s more ambitious proposals that seek to replicate existing market access.

The industry’s proposals, which the Bank had also backed, were rejected by EU officials in Brussels who say it would mean Britain getting all the benefits of EU membership without the costs and obligations.

Carney said it was too soon to judge what the government’s proposals meant for financial services or for the Bank’s ability to take all decisions necessary to keep the financial system and banks stable.

“It’s premature for us to make a judgement on the White Paper and the outcome of these negotiations. It’s also not clear which activities are going to be in scope,” Carney said.

The White Paper was a “first step” in a hugely important negotiation, he added.