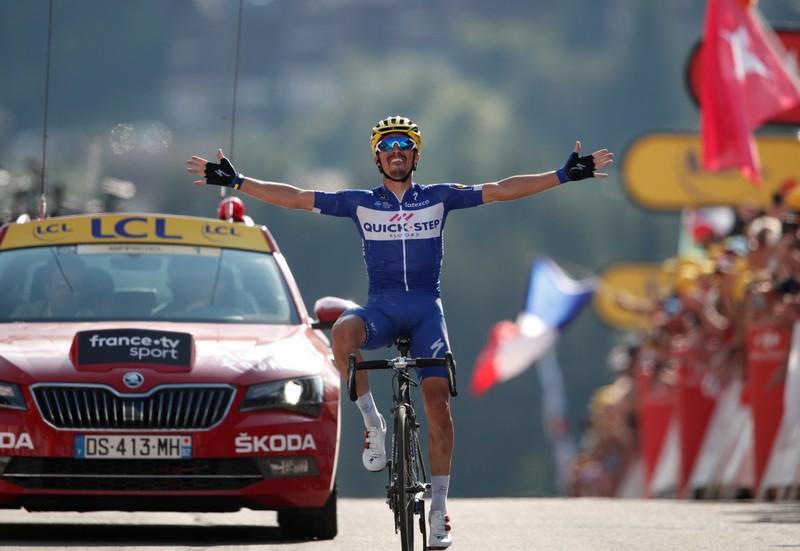 Quick-Step Floors rider Alaphilippe crossed the line to an exuberant reception from the French fans at the end of a stage where the main race contenders held fire.

Yet last year’s runner-up Rigoberto Uran lost time as he struggled on the last climb.

Belgium’s Greg van Avermaet was part of the breakaway group with Alaphilippe and finished fourth to maintain his grip on the yellow jersey. Spain’s Ion Izagirre and Estonian Rein Taaramae finished second and third, respectively.

“I did not expect this, it’s incredible,” said the 26-year-old Alaphilippe after his first win on the Tour.

“I think I timed my effort perfectly I’m improving. I managed to keep control of my emotions. Maybe two years ago I would have attacked too early.”

Colombian Uran, who suffered a crash on the cobbles in Sunday’s ninth stage, finished two minutes 29 seconds behind the group of main contenders as his podium hopes virtually vanished in the first Alpine stage.

Alaphilippe, one of France’s hottest prospects, went solo in the col de la Colombiere, the last of five categorized climbs, and never looked back. He increased his lead in the final descent to snatch the polka dot jersey for the mountains classification.

A one-day classic specialist who won the prestigious Fleche Wallonne last Spring, Alaphilippe brought his team their 50th win of the season. World champion Peter Sagan was also part of the day’s breakaway group and increased his lead in the points classification as he seeks a record-equaling sixth green jersey.

A day after the first rest day, the big guns were in no mood to take risks ahead of two more stages in the Alps.

Defending champion Chris Froome’s Team Sky controlled the pace and prevented attacks as headwinds blew in the ascent of the col de la Colombiere. Only Ireland’s Dan Martin tried his luck inside the last kilometer of the climb, but he was quickly reined in on a disappointing day for fans, who were expecting fireworks.

They might come on Wednesday’s 11th stage, a brutal 108.5-km mountain trek from Albertville to La Rosiere that features four categorized climbs, including a summit finish.