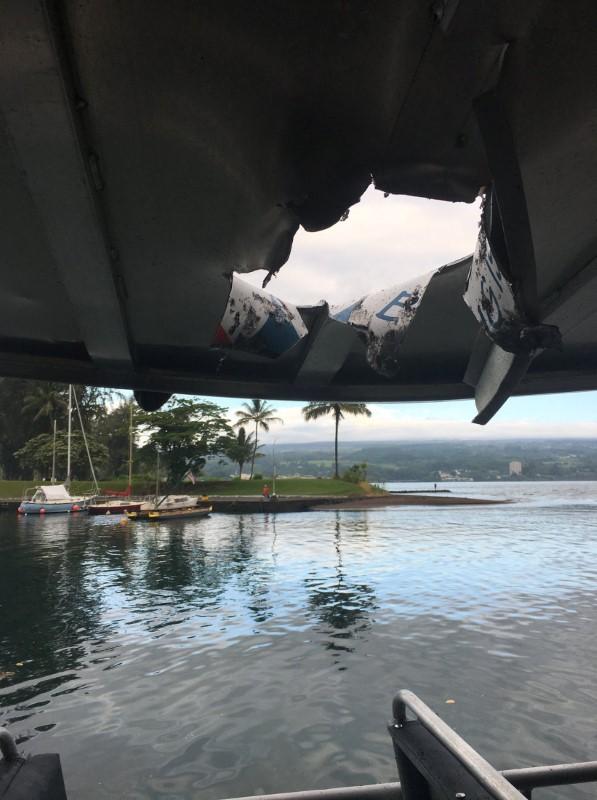 HONOLULU (Reuters) – Tour boats offering a close-up look at lava pouring from Hawaii’s Kilauea volcano into the Pacific Ocean returned to the waters off the Big Island on Tuesday under new safety rules, a day after 23 passengers were injured by ash and molten rock.

Monday’s accident prompted the U.S. Coast Guard to require boat captains to stay at least 300 meters (yards) from lava flowing from fissures in the volcano flank. Previously, experienced operators such as Shane Turpin, captain of the boat hit in Monday’s explosion, had to stay only 50 meters (164 feet)away.

An investigation was under way to determine the exact location of Turpin’s vessel at the time of the blast, said U.S. Coast Guard spokeswoman Sara Muir. Afterwards authorities will decide whether to increase the 300-meter restriction zone, she said.

“It’s information all of our partners are interested in as they look at that zone and decide whether 300 meters is sufficient,” Muir said by telephone.

Turpin, owner of Lava Ocean Tours, said he was well outside the 50-meter zone at the time of the blast, which caused cuts and burns to numerous passengers. One woman had her thigh bone broken.

“We were headed east away from the flows,” Turpin said in a text message. “My recollection is we were around 200 meters from the flow.”

A video posted on Facebook by Will Bryan, a passenger aboard Turpin’s boat the “Hot Spot”, shows glowing orange lava flowing into the ocean and steam billowing up, then an explosion and the sound of screaming passengers as rocks pelt the boat.

“We didn’t expect to be that close,” said Bryan in a Facebook message, adding that he suffered a burn and his girlfriend got ash in her eye.

The injuries were the first on a tour boat from flying lava in recent times, according to U.S. Coast Guard spokeswoman Amanda Levasseur.

Lava Ocean Tours was set to take tourists out as usual on Tuesday, although the “Hot Spot” was taken out of service after a basketball-size “lava bomb” tore a hole through its roof, a company saleswoman said.

Asked if the company had seen cancellations, she said “not really”.

“We try to make things safe for people when we take them out,” Marzo said in a Facebook post.

Hawaii’s tourist agency reassured visitors it was safe to see Kilauea and its lava, the Big Island’s top attractions.

“Today’s unfortunate event is a good reminder about the risks involved with observing a natural wonder like this one and the reason officials are continuously monitoring the eruption to ensure the public is kept at safe distances on land, in the air and while at sea,” Ross Birch, executive director of the Island of Hawaii Visitors Bureau, said in a statement.

A hole, punched through the roof of a tourist boat, is seen, after lava from the Mount Kilauea volcano exploded in the sea off Kapoho, Hawaii, U.S. July 16, 2018. Hawaii Department of Land and Natural Resources/Handout via REUTERS