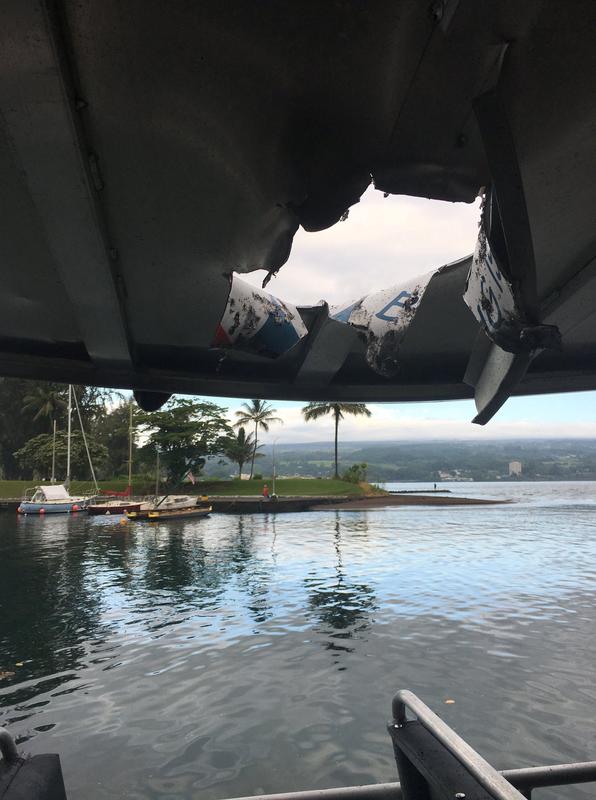 HONOLULU (Reuters) – A blob of hot volcanic lava struck an ocean tour boat just off the Big Island of Hawaii on Monday, injuring nearly two dozen people in the worst casualty incident to date from the ongoing eruption of the Kilauea Volcano, authorities said.

A hole, punched through the roof of a tourist boat, is seen, after lava from the Mount Kilauea volcano exploded in the sea off Kapoho, Hawaii, U.S. July 16, 2018. Hawaii Department of Land and Natural Resources/Handout via REUTERS

One woman’s leg was broken when the “lava bomb,” which spattered out of the water with explosive force as molten rock poured into the ocean, crashed through the roof of the boat into the vessel’s seating area, said Hawaii County Fire Department Battalion Chief Darwin Okinaka.

The boat was able to return to its port in Hilo less than an hour later, and three of the injured were taken to a local hospital by ambulance, Okinaka said. Nine or 10 others with less severe injuries were driven to the hospital by private vehicle, and 10 more people were treated by paramedics at the port, he told Reuters by telephone.

A civil defense spokeswoman, Kelly Wooten, put the total number of injuries at 23.

The Hawaii Department of Land and Natural Resources (DLNR) said the boat was operated by Lava Ocean Tours, one of at least three companies offering daily excursions to passengers who pay around $220 per person to watch from a vessel lava flowing into the sea.

Officials for the company were not immediately available for comment.

State and local police and the DLNR were investigating the incident, which occurred shortly after dawn near the eastern-most edge of the Big Island, where lava from the 10-week-old Kilauea eruption has been flowing into the Pacific since early June.

The boat’s distance from shore and from the site of the lava explosion was not immediately known, fire and civil defense authorities said.

Two entire housing developments consisting of hundreds of dwellings were destroyed several weeks ago as lava spewing from a fissure on the slope of the volcano inundated the seaside Kapoho area in the vicinity of Monday’s accident. Hundreds more homes have been swallowed closer to the eruption site itself.

The property losses marked the most destructive eruption of Kilauea in modern times, but no fatalities have been reported.

The most serious previous injury was of a man whose leg was shattered in May when he was hit by molten lava ejected by a volcanic fissure while he was standing on the third-floor balcony of his home about 200 yards (meters) from a flow in the Pahoa area.

The passenger whose leg was fractured on the boat on Monday, a woman in her 20s, was listed in serious condition, Okinaka said. The other tourists hurt in the incident suffered minor burns and other more superficial injuries he said.

Reporting by Jolyn Rosa in Honolulu; Additional reporting and writing by Steve Gorman in Los Angeles; Editing by Sandra Maler