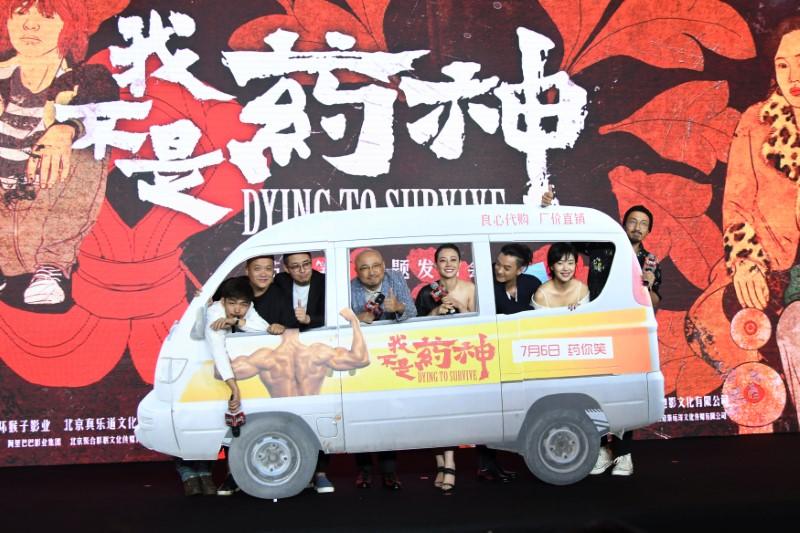 BEIJING (Reuters) – A low-budget Chinese movie about a leukemia patient who turns to smuggling cheaper cancer drugs from India has struck a chord with Internet users and even the country’s leaders, spotlighting national anxieties about unaffordable hospital care.

Director Wen Muye poses for a picture with cast members and crew of the movie Dying To Survive at the 21st Shanghai International Film Festival, in Shanghai China June 16, 2018. Picture taken June 16, 2018. REUTERS/Stringer

For years, China has promised healthcare reforms to dispel concerns about overpriced medicines and widen distribution of resources that tend to focus care in big inner-city hospitals, but progress has been slow.

“Dying to Survive”, which is loosely based on the real-life exploits of a cancer patient jailed for leading a Dallas Buyers Club-style group that illegally imported drugs, raked in $390 million in its two-week run, box office tracker EntGroup said.

Internet users welcomed how the film, one of the year’s top-grossers, tackled a flashpoint social issue head-on, a rarity in strictly censored China, with some saying the film-makers struck a careful tone to steer clear of censors.

The film directly hits “a social wound” about not being able to get hospital treatment, said Gao Wei, an industry expert at the China Centre for Globalization.

“As a film that criticizes what is actually happening, it could only become popular because it got the level of criticism right to pass China’s censors.”

China has a universal medical insurance program for the bulk of its population, although coverage remains thin and highly focused on basic medical care.

The film has sparked heated debate about the cost of medical care, with patients struggling for access to drugs to treat serious diseases, and often paying from their own resources.

Beijing has been trying to force down the cost of drugs, especially those used to treat cancer, by cutting import tariffs, negotiating steep price cuts with global pharmaceutical firms and putting more medicines on its reimbursement list.

New drug approvals also lag far behind developed markets such as the United States, which has long forced patients to look overseas via gray markets to get access to medicine.

“Dying to Survive” features a struggling shopkeeper who imports cheap Indian drugs banned by Chinese authorities to earn a quick buck, but soon finds himself sympathizing with patients’ plight, and risking everything to help them.

Even Premier Li Keqiang cited the film in an appeal on Wednesday to China’s regulators to “speed up price cuts for cancer drugs” and “reduce the burden on families”, made in an official statement on the government’s website.

“This little step might actually be a big step for domestically-made films,” said critic Yang Eryu in comments on the popular WeChat account of the magazine Vista Story.