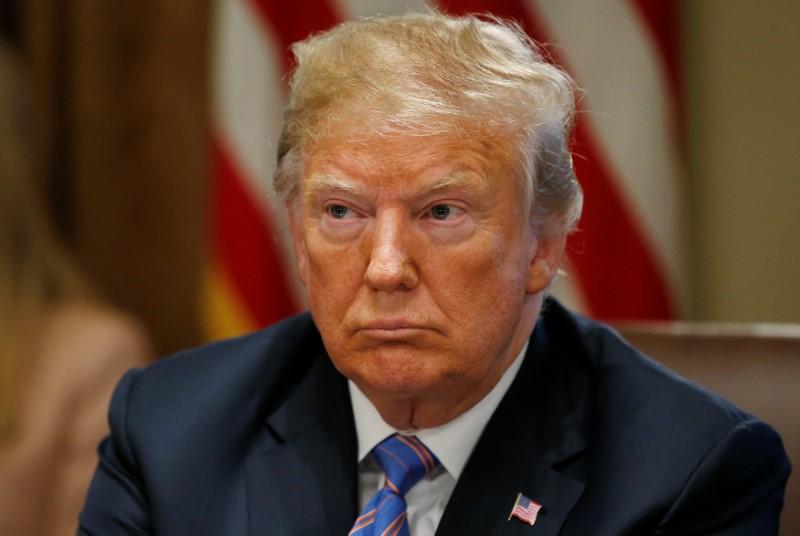 (Reuters) – President Donald Trump contradicted U.S. intelligence agencies again on Wednesday, saying that Russia was not still targeting the United States, and accused his critics of being deranged.

The day after he tried to quiet a political uproar over his failure to confront Russian President Vladimir Putin during their Helsinki summit for Moscow’s 2016 U.S. election meddling, Trump adopted his usual defiant posture and dismissed assessments of Russia from the intelligence community.

“We’re doing very well, probably as well as anybody has ever done with Russia. And there’s been no president ever as tough as I have been on Russia,” Trump said before a Cabinet meeting at the White House, adding that Putin “understands it and he’s not happy about it.”

Asked by reporters whether Russia was still targeting the United States, Trump shook his head and said, “No.”

Trump’s comments followed a series of early morning Twitter posts on Wednesday in which the Republican president said his heavily criticized summit with Putin would eventually produce “big results” and accused his critics of “Trump Derangement Syndrome.”

“Some people HATE the fact that I got along well with President Putin of Russia. They would rather go to war than see this. It’s called Trump Derangement Syndrome!” the president wrote.

Trump has faced bipartisan fury at home since the summit in Finland.

Critics have accused him of siding with Russia over his own country by failing to criticize Moscow for what U.S. intelligence agencies last year described as Moscow’s interference in the 2016 election in an attempt to sow discord, aid Trump’s candidacy and disparage Trump’s Democratic opponent Hillary Clinton.

Members of Congress from both parties have suggested possible legislation to toughen U.S. sanctions against Russia and enhance election security ahead of November’s midterm voting.

On Twitter, Trump said he had received praise for his heavily criticized news conference with Putin.

“So many people at the higher ends of intelligence loved my press conference performance in Helsinki,” Trump said on Twitter. “We got along well which truly bothered many haters who wanted to see a boxing match. Big results will come!”

Special Counsel Robert Mueller, investigating Russia’s role in the 2016 election, is looking into whether Trump’s campaign colluded with Russia, an allegation the president denies.

At the Helsinki news conference, Trump cast doubt on the findings of the agencies. But on Tuesday he said he misspoke and had accepted their conclusions about Russian meddling, although he hedged by deviating from his prepared notes to say “it could be other people also. There’s a lot of people out there.”

U.S. Director of National Intelligence Dan Coats told a congressional committee in February that he already had seen evidence Russia was targeting U.S. elections in November, when Republican control of the House of Representatives and Senate are at stake, plus a host of positions in state governments.

In rebutting Trump’s dismissive comments about U.S. intelligence on Monday, Coats said in a statement, “We have been clear in our assessments of Russian meddling in the 2016 election and their ongoing, pervasive efforts to undermine our democracy.”

Democratic Senate leader Chuck Schumer said Trump’s tweets on Wednesday showed he was not committed to accepting the findings of intelligence agencies, and his Tuesday comments were merely damage control.

“The only reason there was a walk-back is that the president was forced by pressure from many of my Republican friends here, from his allies in the media, and his own White House staff,” Schumer said on the Senate floor. “But it’s clear from today’s tweets he does not mean it.”