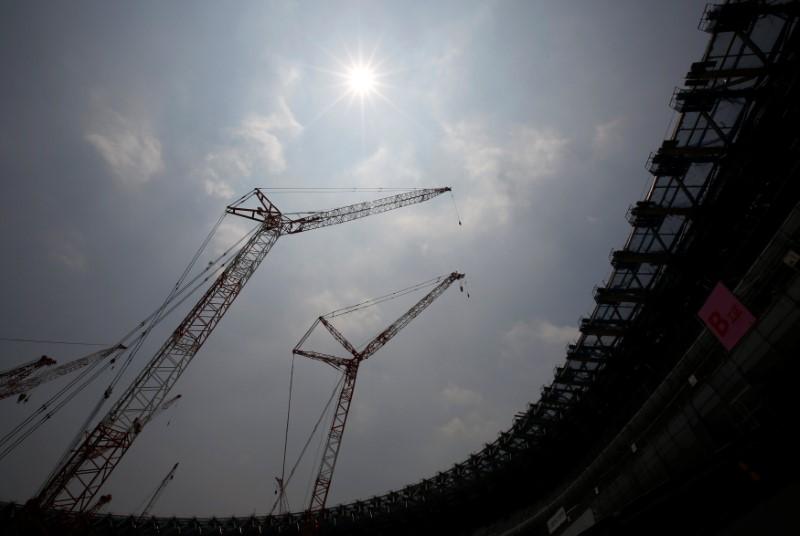 TOKYO (Reuters) – As the two-year mark approaches for the Tokyo 2020 Olympics, Japan is being scorched by an intense heatwave that has prompted fears of similar extreme weather when the sporting showpiece takes place in the country.

Construction site of the New National Stadium, the main stadium of Tokyo 2020 Olympics and Paralympics, is seen under the light of the sun during a heat wave in Tokyo, Japan July 18, 2018. REUTERS/Issei Kato

More than a dozen people have died as temperatures soared above 40 degrees Celsius (104 Fahrenheit) for the first time since 2013, and the thermometer hit 43 Celsius during an Olympic Stadium media tour on Wednesday.

The opening ceremony will be held at the venue on July 24, 2020, a time of year when Tokyo records average temperatures of around 25 Celsius, which combined with severe humidity will create tough conditions for athletes and spectators alike.

Earlier this year, experts warned of the risks of heatstroke at the Games, which runs until Aug. 9, with conditions reaching levels at which sporting activities would normally be halted.

The issue is one Tokyo 2020 organizers are taking seriously as they consider a raft of counter measures to battle the extreme heat.

Workers and media memebers are seen under the light of the sun during a heat wave, at the construction site of the New National Stadium, the main stadium of Tokyo 2020 Olympics and Paralympics, during a media opportunity in Tokyo, Japan July 18, 2018. REUTERS/Issei Kato

These include increased shelter and cooling fans provided for spectators, and the installation of a ‘Wet Bulb Globe Temperature’ device designed to provide constant feedback to assess levels of heat stress at each venue.

The data provided will help organizers adjust conditions for supporters depending on the weather.

The scheduling of events, set to be announced later on Wednesday following an International Olympic Committee (IOC) meeting with Games organizers in Lausanne, will also be designed with the protection of athletes and supporters in mind.

Tokyo 2020 organizers also told Reuters that they were looking to establish guidelines on whether a scheduled event would be allowed to go ahead if they were worried by the danger posed of extreme temperatures.

Speaking at the stadium media tour, officials from the Japan Sports Council (JSC) said solutions for tackling heat would be a priority for the Olympic Games.

While beams for the stadium’s inner roof — made with wood supplied from all 47 prefectures — are meant to project warmth and hospitality, JSC official Keiji Kato explained they were also designed to circulate air to keep spectators cool.

Outside the stadium, Japan has had a long-standing love affair with the marathon but spectators will likely need to wake up very early to watch the races in Tokyo, with organizers likely to schedule a dawn start for safety reasons.

Yet on Wednesday, despite the heat, there were still several joggers braving the conditions to run the circuit around Tokyo’s Imperial Palace, with the most committed of them admitting they had struggled.

“I have been running (this route) for the past five years, but for the first time, I could not complete the track both last week and this week,” 44-year-old Tatsuro Abe told Reuters.

“It has been truly intense this time round.”